A while ago, I told J that I wanted to make him a surprise cake for his birthday. He kept asking me if I knew what he liked, listing off ingredients that he was afraid I would add to some fancy dessert. I told him not to ask any more questions and just trust me. After a lovely family dinner out, we all went back to J’s house for gifts and cake.  I presented a white-iced cake with the “Happy Birthday J” on the top, but it wasn’t until after he blew out the candles and I gave him a slice that he realized the surprise. 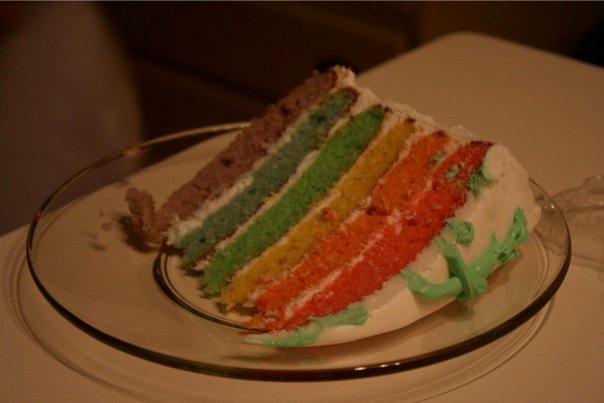 I’m pretty sure I was way more excited than he was surprised, but it turned out so well and was deeee-licious. So here’s the recipe. It’s ridiculously easy, just takes a little time.

You will make two cakes and separate them into six bowls. Start with the first box of the cake mix, following the directions on the box. Separate the prepared mix into three bowls with about 1 cup of cake batter per bowl. Add food coloring to each: one purple, one blue, and one green.

Bake the three cakes in round pans according to the box instructions. Make sure to check the cakes about 10 minutes before they are supposed to be done. With less mix in the pans, they tend to cook faster. I only had two 9-inch round cake pan, so I cooked purple and blue together and then did the green one after I had a free pan. Like I said, this is really easy but takes time. :)

Repeat with the second box of cake mix and the remaining three colors (yellow, orange red).

Let the cakes cool. Level the tops of each layer of cooled cake with a large bread knife. Slice into the cakes horizontally so that the centers of the cakes are no longer higher than the edges. This will ensure the colors are even and prevent the cake from toppling over.

Begin assembly with the purple layer. Set the purple layer on your cake stand or plate. Add enough frosting to cover the layer with enough to spill over the edges (about 1/2 to 1 cup of frosting). Run the flat, smooth side of a large knife around the cake to smooth out the frosting.

Add the blue layer of cake on top of the frosted purple one. Put more frosting in the middle and spread again with the flat, smooth side of a large knife so that the frosting covers the layer and falls out over the edges. Run your knife around the outside edge of the cake as well, to smooth out the sides.

Those are the original instructions, I actually separate the process into two days since I had limited time and cake pans. I made one box mix into three cakes, frosted them and put them in the fridge overnight, the repeated the process with the second box mix then frosted the entire cake the third day before taking it to the birthday party.

This tasty treat sure was a crowd-pleaser. :)