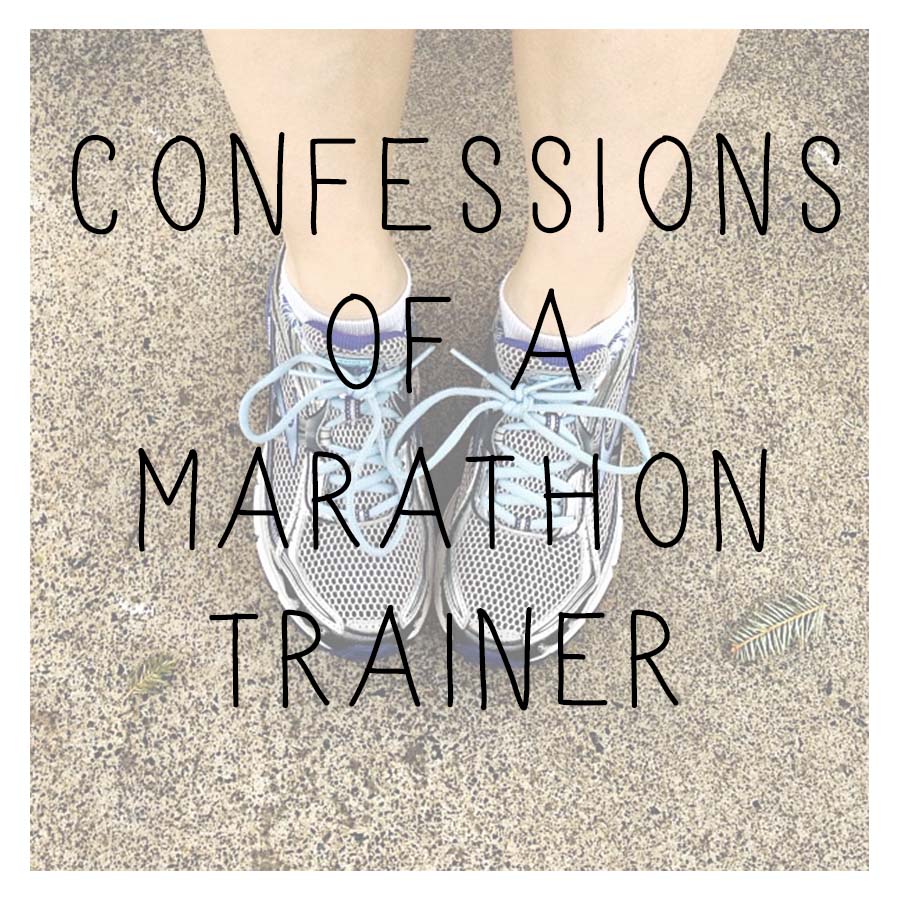 I feel weird telling people that I’m running a marathon this weekend. It feels like I’m talking about someone else. When I first signed up, I told everyone! I was afraid I would chicken out, so if I knew there were umpteen people keeping me accountable, I felt like I could keep going. But now? I just feel really silly when someone at work asks what I’m doing this weekend. Oh not much, just running a marathon.

Two months ago, I secretly hoped I would have injured myself by now and, like a martyr, not been able to participate in the marathon. I admit, that was a low moment.

I can’t do math while I run. During my 16-miler, I was on a trail that would count down every half-mile until the end. I saw “2.50” on the pavement and thought of it like a clock — 1/5 of the mile was over, instead of really 1/2. So half a mile later I saw “2.0” written on the pavement, I thought it was the fastest mile of my life. But it really was quite an average half-mile for me.

I also can’t spell when I’m running. I once listened to a sermon and they used the word schizophrenia. I literally spent the next ten minutes in my head trying to figure out how to spell it. Is it skitsophrenia? skitsofrenia? (Both wrong.) How do they come up with words like this? How would I type this? And then I start pretending to type the word with my fingers while I run. Which reminds me of my piano lessons and I then I pretend to play the piano with my fingers songs I have memorized. I remember the chorus but forget the beginning. How does this song start again? Oh why am I thinking about spelling, typing and piano playing –JUST KEEP RUNNING!

I wish I had raised money for this marathon. Why didn’t I? What’s the point in running 26.2 for the fun of it? Maybe there are retroactive fundraisers. Look, I did this. Donate!

I can’t run any more than what I have mentally prepared for. If I am going out to run 5 miles, then there’s no way you’ll convince me to run just another. Which is why I’ve been practicing finishing each long run with an extra 0.2 to prepare for the race. That tiny 1/5 of a mile is longer than you think!

Running has a way of –ahem– getting things moving, if you know what I mean. I am proud to say I have never gone to the bathroom in the woods, but I admit I have stopped many a time in Walgreens. You runners know what I’m talking about. ;)

Drivers are very nice to runners. Almost too nice. I personally look forward to traffic lights because it means a forced break. A chance to take a swig of my water and relax for a moment or two. But these drivers must see my running belt and exhausted face and think, Oh, she’s a serious runner, and will give me a little wave like You go first! And I’m all like, No, seriously, you go first. And they politely insist No you go! with another wave and since it’s me against a person operating a heavy machine, I reluctantly pick my feet up and continue running.

There’s one thing I for sure am going to miss: The Calories. When you get home from running two and a half hours straight, you can pretty much eat whatever you want.

Showers are the greatest things after a run, especially a long run when you have crystalized sweat on your forehead. Has anyone else experienced that? It sounds gross, but that’s just what happens when you run for over an hour in the cold. It feels so weird and wonderful to wash it off.

Once after a really, really good run, I was so elated I fist-pumped the air and high-fived myself. I didn’t really think about it, until I realized I was near a busy intersection and a dozen cars probably saw me. Haha oh well! Maybe I’ll do that when I finish on Saturday, if I survive.

Ok, I know I sound a little jaded in this post, but I’m so scared and nervous and excited and ready, but not ready! I am taking a four-day weekend, so I’ll catch you on the flip-side!