Y’all, I did it. I finished the Charleston marathon. I didn’t run very fast, and it took me waaaay longer than I thought it would (over five hours in case you’re wondering), but! it is done, and I did it. I will spare you the boring details of recapping every minute of the race, but let me just share some of the highlights. There are three.

The first 14 miles
The first half was fantastic. It was chilly, sunny, and we ran through the most beautiful parts of Charleston. We ran along the Battery, up King Street, and beside the water. Allison took this picture on mile 6 and we were all smiles at that point. 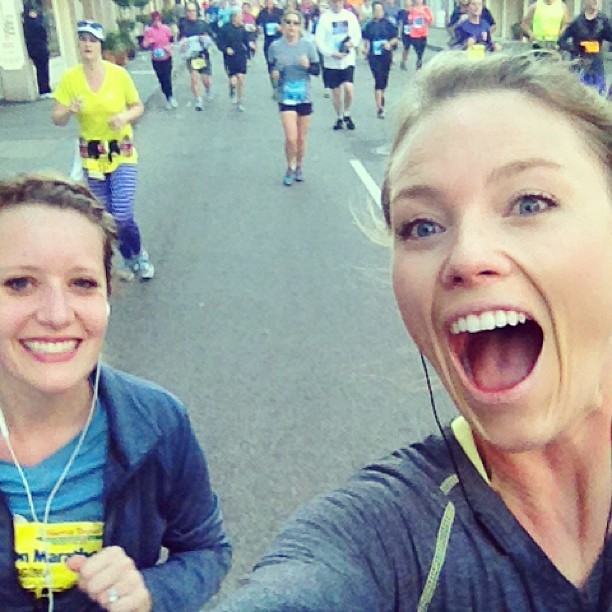 Allison was pacing a little faster, so we separated from her about mile 10 and Christen and I continued to run at a slower pace. I was feeling up for multitasking, so I took a few of these pics on a pedestrian bridge at one point. It was the perfect running day. 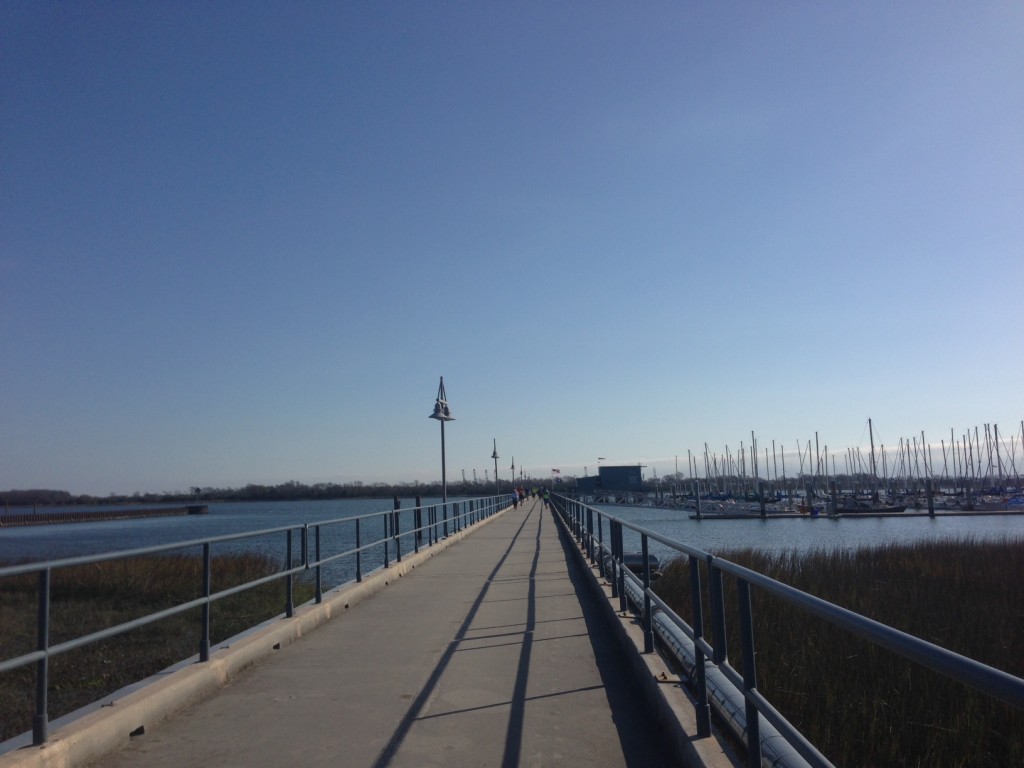 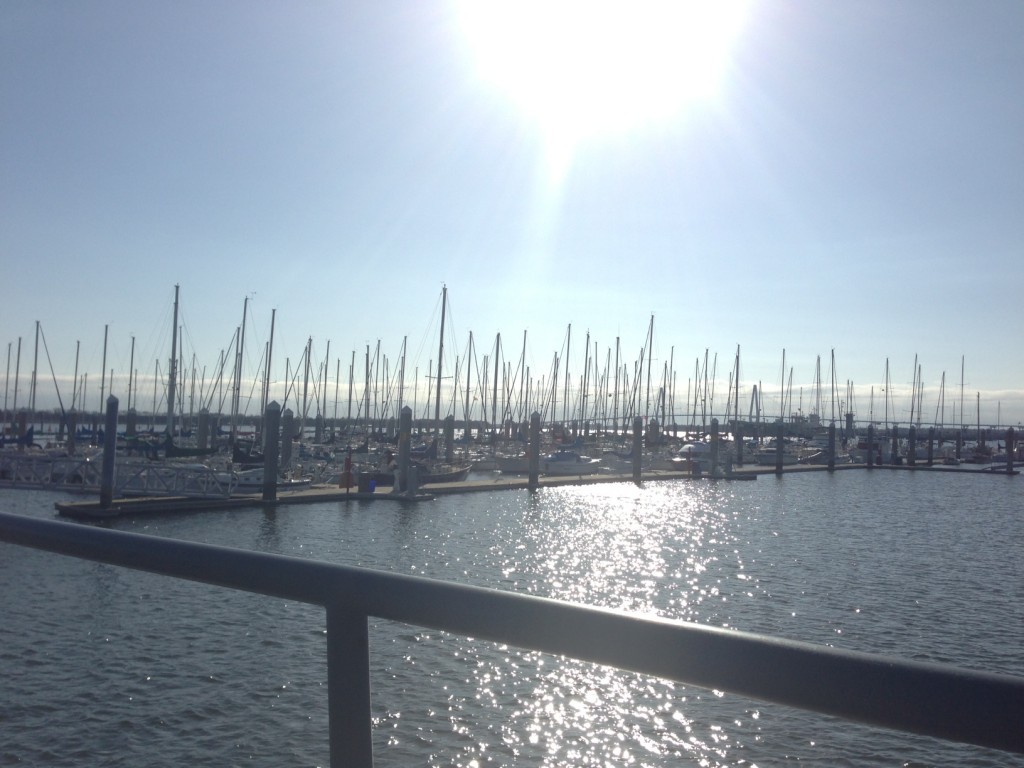 Miles 16, 18 and 22:
Throughout the race, people were scattered in different neighborhoods to cheer the runners on, and I heard a loud bunch coming up at about mile 16. Yay, I thought, I need some encouragement about now.

As Christen and I approached, the group got louder. I thought maybe there was someone behind me that the group knew, when I realized it was me they were shouting for. I saw my little sister first, and then my older sister, and then my mom, (mom!!) and then my dad, and then J with Leia, and then Andrew, my brother in law. What! What were they doing there! They all had signs and were cheering and I stopped for an instant to give everyone a little hug. I started tearing up — I couldn’t believe they spent hours in the car just to watch me run. It was too much. 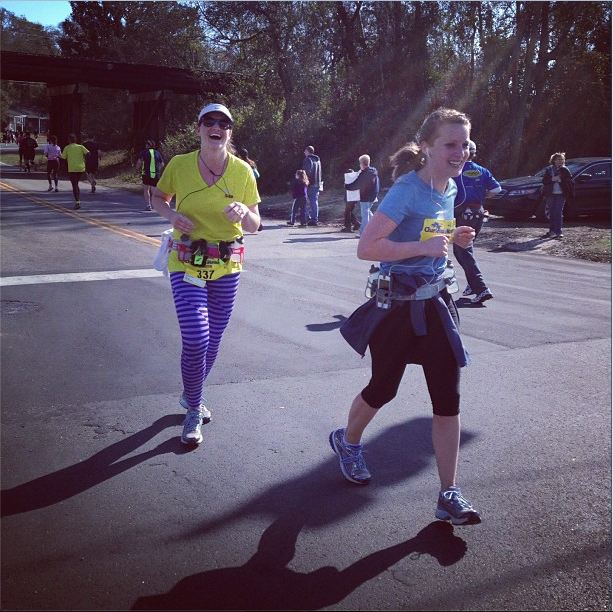 I saw them again at mile 18, and then again at 22, the best parts of those hours. The last hour was hard. Really, really hard. My ankle started hurting me about two hours in, and every time I stopped to get a drink of water, it was torture starting up my jog again. Christen and I walked a little bit in the last few miles and tried our best to encourage each other. We were so close.

The finish line:
The last mile felt like it was five miles long. We finally reached a stretch of road with volunteers and they told us the end was near — 26 was right around the corner. We picked up our speed and finally passed mile 26. People cheered that there were just two more corners and the finish line was close. We ran faster and saw the white banner a few yards away. I saw everyone I love at the finish line and ran fast. I crossed it, cheering, and nearly collapsed into my mom’s arms, overcome with exhaustion and relief and happiness. 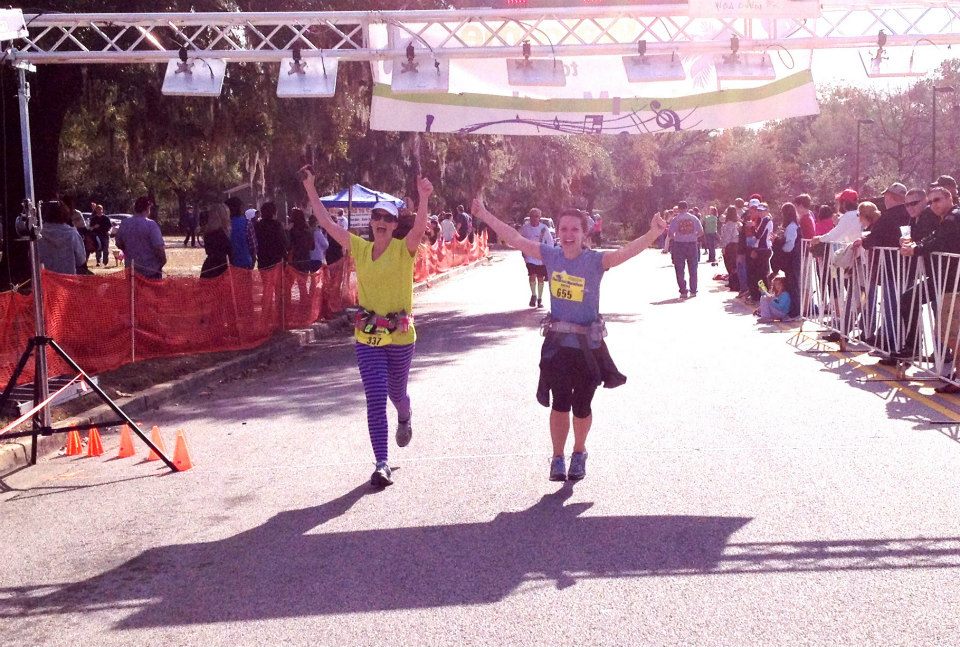 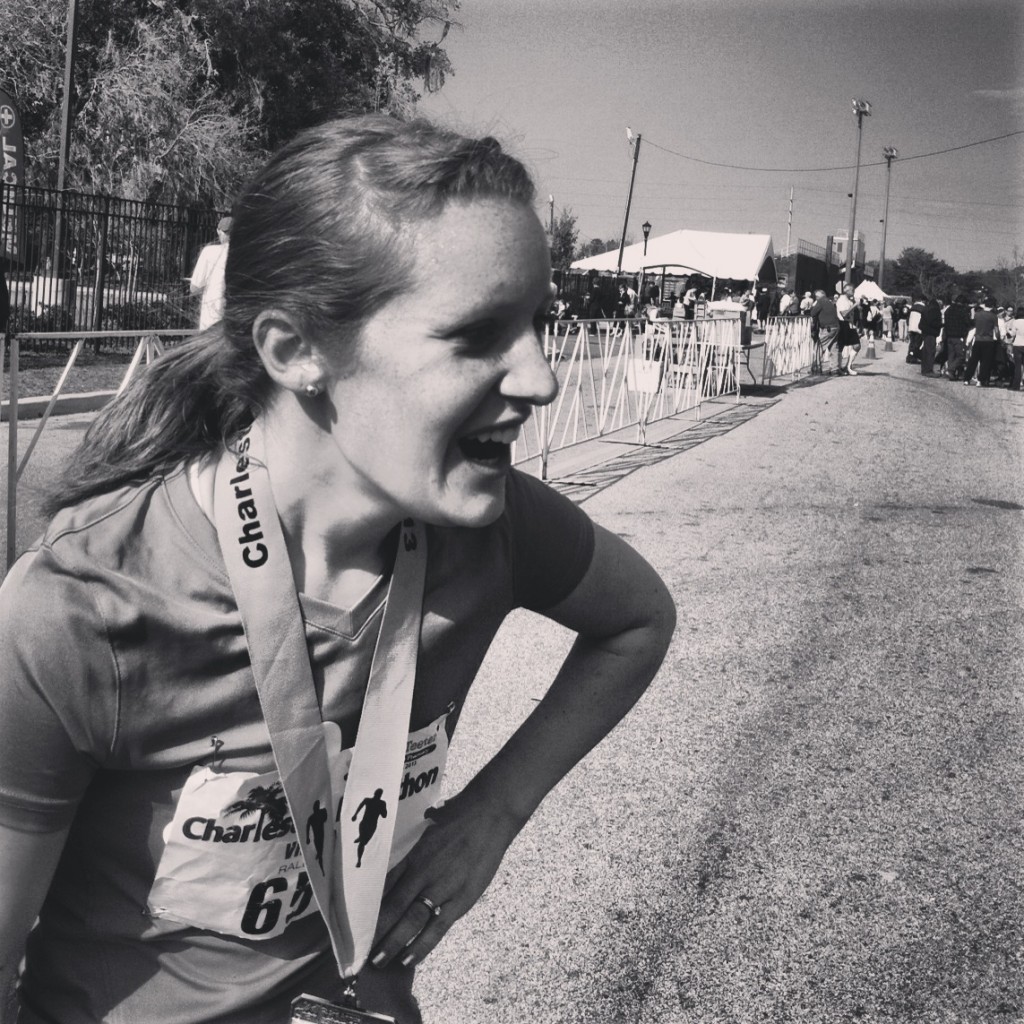 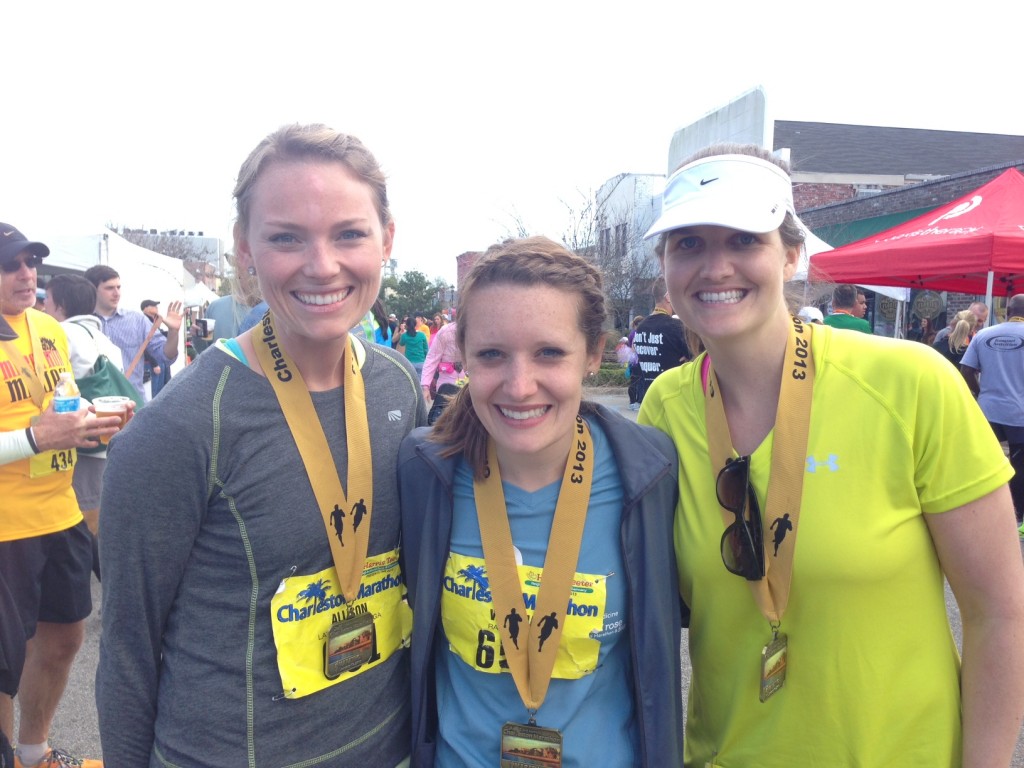 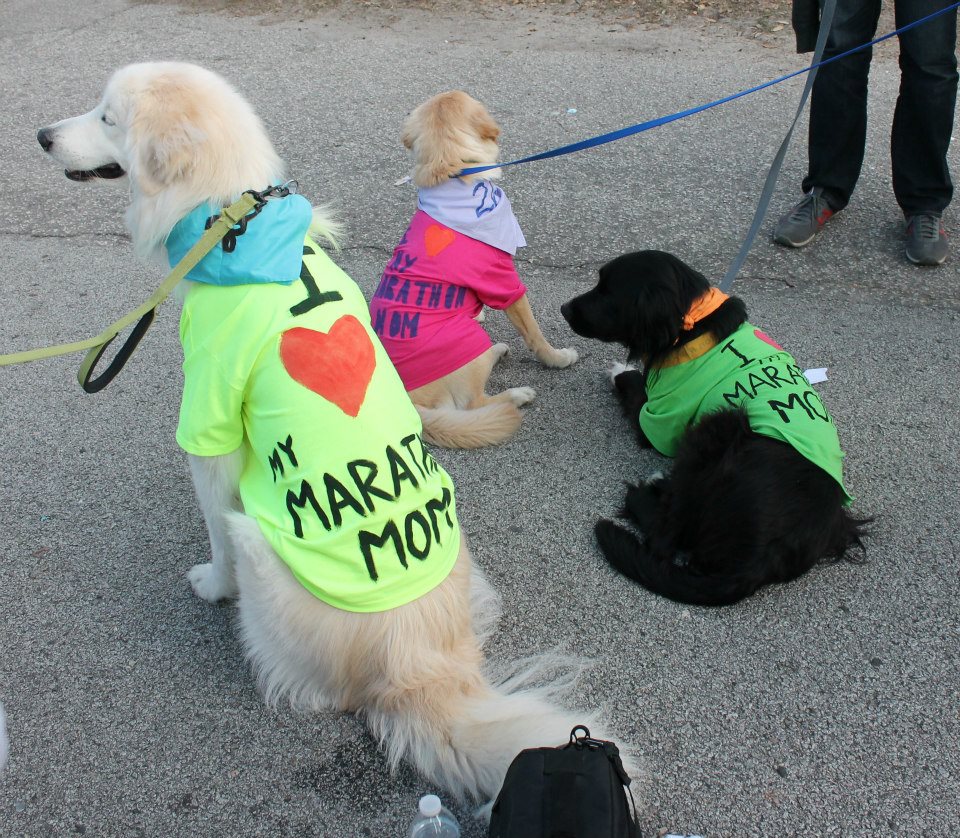 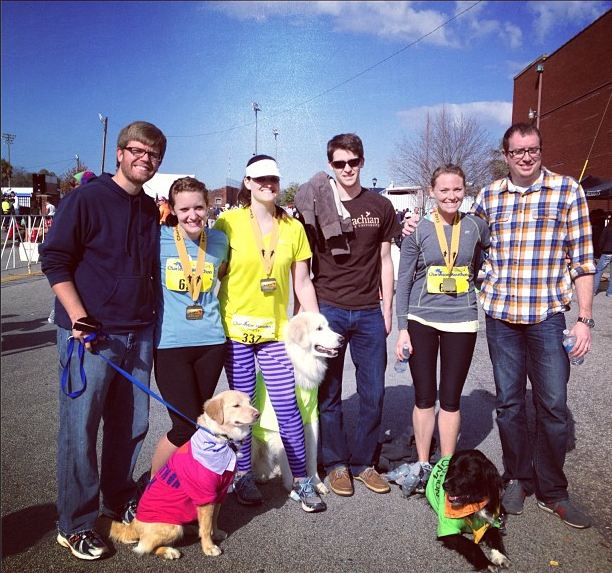 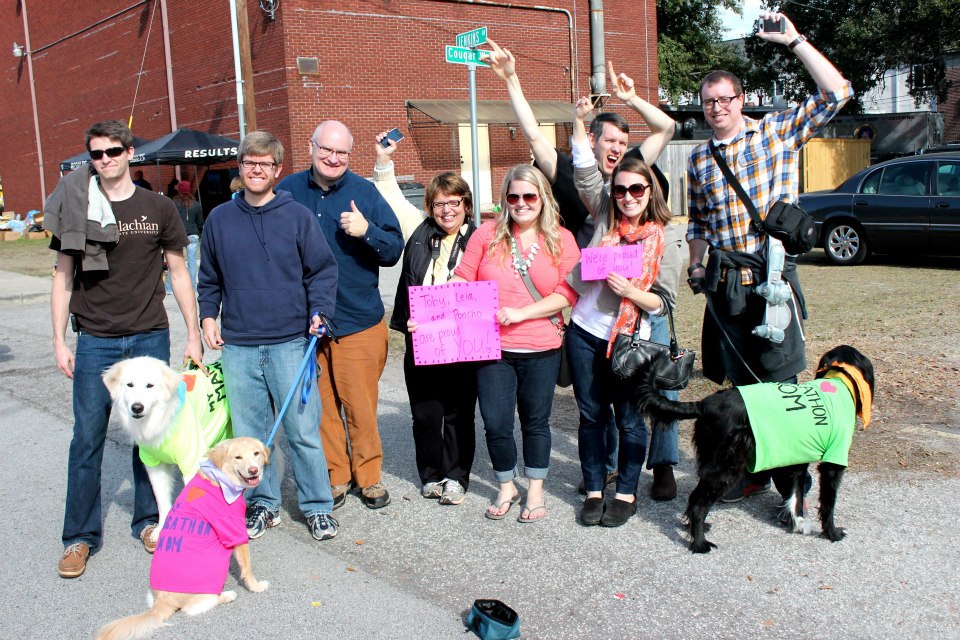 We hung around to take pictures and celebrate with the greatest cheerleaders. We reluctantly said goodbye to my family, who headed back to NC that afternoon. I am still in shock and awe that they came so far, just to see me run. It meant so much. The rest of us limped to the car, picked up some pizzas on our way back to Folly Beach, and ate as much as our hearts desired.

It was one of the hardest and happiest days of my life, and one I will never forget.