I’m not sure why, but console tables are a little intimidating to shop for and scream I’m an adult! more than any other piece of furniture. (Okay, maybe buying nursery furniture says that too, but I’m not there yet). I’ve never had a console or entryway table before because I have never lived in a space big enough to need one. But upon entering this house, I had one of those I-need-something-here moments, and thus started the hunt for the perfect table.

Our front hallway needs two tables, really. One for the entryway by the front door and one at the end of the hallway to anchor that long narrow wall right by the garage door, half bathroom, and dining room. (Here’s a full home tour when we first moved in). Both hallway and wall are very small, so it was important to find two that were narrow, functional, and (most importantly) pretty.

The end of the hall table needed to be closed to help hide clutter and anchor the tall wall. I intended to find an old vintage dresser, but every one that I came across was too wide, and this spot in particular needed to be very narrow as it’s in the line of walking from three different directions. Plus all of the antique ones were more than I wanted to spend (anyone have that problem??).

One week in September Target was having a 20% off sale on all their cabinets and console tables. Perfecto! I was trying to decide between this one or this one, and decided to go with the half-moon shaped one because it had closed doors and I really don’t need another thing to style and try to make pretty. (Sometimes you just need a place to stuff stuff — amiright?)

So here’s my first table: 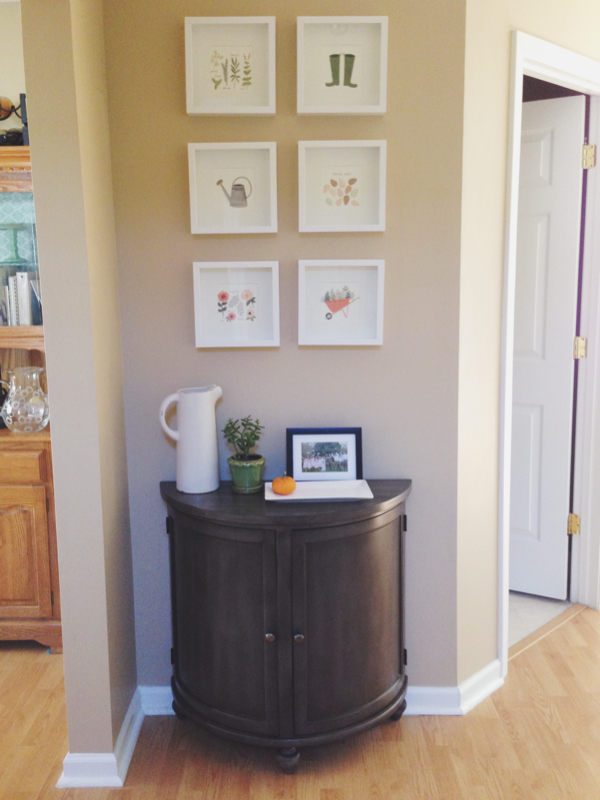 It has a gray antique finish, so it looks more expensive than it actually was. On sale it was $115 (including my 5% target card discount), so using $100 from my birthday I only had to pay $15 out of pocket. Cha-ching! 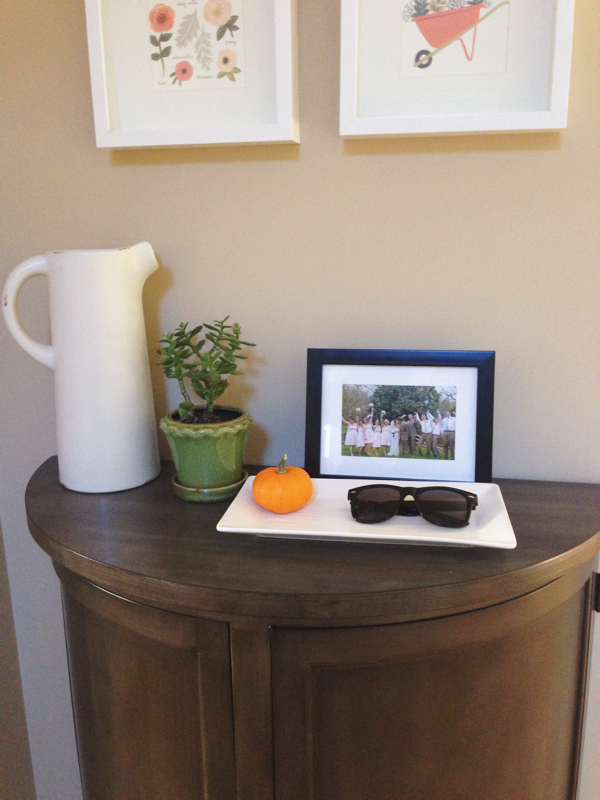 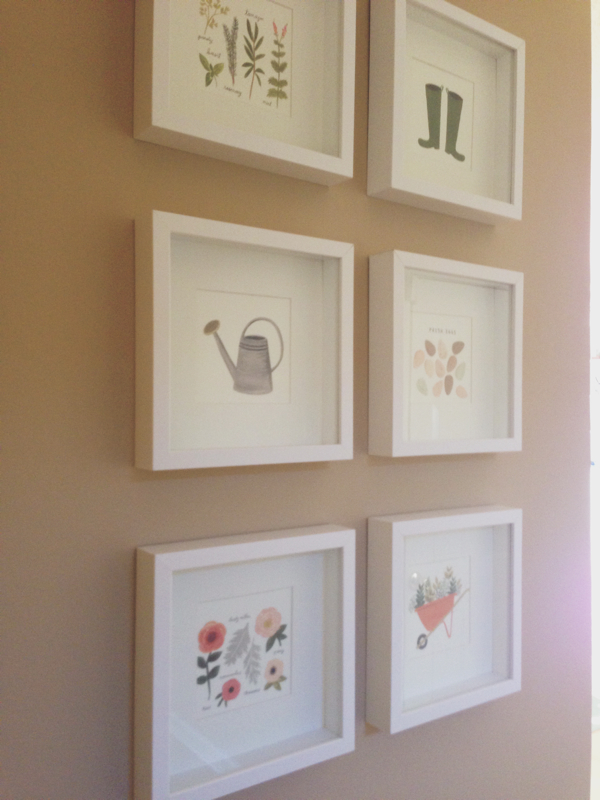 In case you’re curious, the frames above are from Ikea and hold six images from the mini 2013 garden Rifle paper calendar. On the table is a white tray (from Target, last year), white pitcher (from Target, this year), and a plant. Inside the cabinet I store random stuff like like vases or paper plates or bowls that are functional but not really pretty. It’s very nice to have a spot to hide things. :)

Back in July, after we were under contract for the house, I was idea collecting. God bless my Pinterest followers because every half hour I was pinning any little thing I thought would be a possibility in the house. During that time I decided I fell in love with the industrial wood+metal look. I don’t want my whole house covered in it, but thought it would be perfect for the front door, so long as it was narrow enough to fit in the small hallway and long enough that it spanned the office doorway. Kind of like this, except without the wheels.

One day in August I found the perfect table at Marshall’s. It had dark wood on the top and bottom in between a black metal frame, exactly what I was looking for. This metal finished product is formed through metal casting or sand casting process. The price was affordable, which at the time felt really steep. I texted J to see what he thought; he liked it and said go for it (he’s a keeper, that one). But I thought $150 was too much to spend and decided to sleep on it and come back the next day if I really wanted it.

As you can guess from all stories that start with I found it at Marshall’s but decided to mull it over… the next day the entry table of my dreams was gone. The two side tables that matched were still there, just sitting there mocking my indecision. I went back a few times in hopes that one would magically reappear, but after a few weeks decided it wasn’t meant to be.

Fast forward to October 25, I went back to Marshall’s (on a hunt for boots) and wouldn’t you know it, that entry table was sitting in the middle of the floor. Huzzah! Forget the boots — let’s buy a table! I maneuvered it awkwardly to the front of the store and thanked a nice clerk to help haul it in my car. Of course, a better way to end this is to tell you I got it at 80% off or something like that… but nope, I spent full price on that sucker and haven’t looked back since. 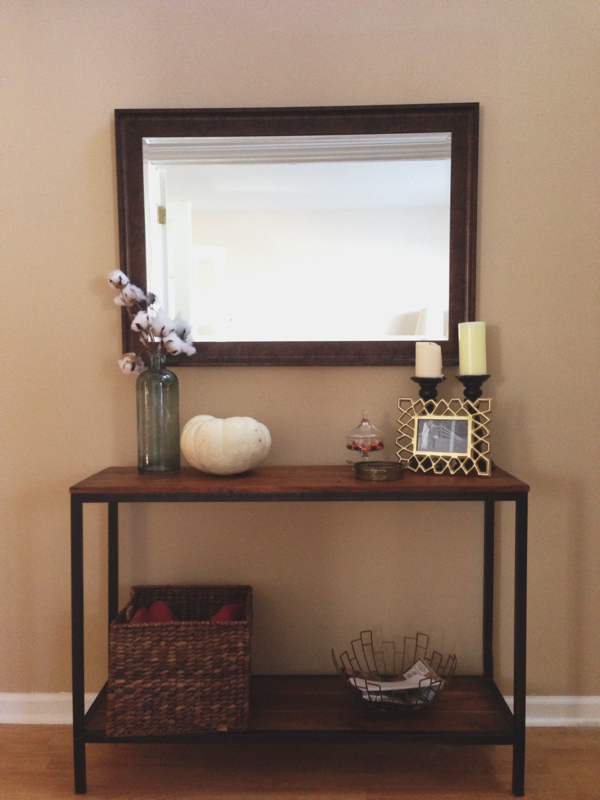 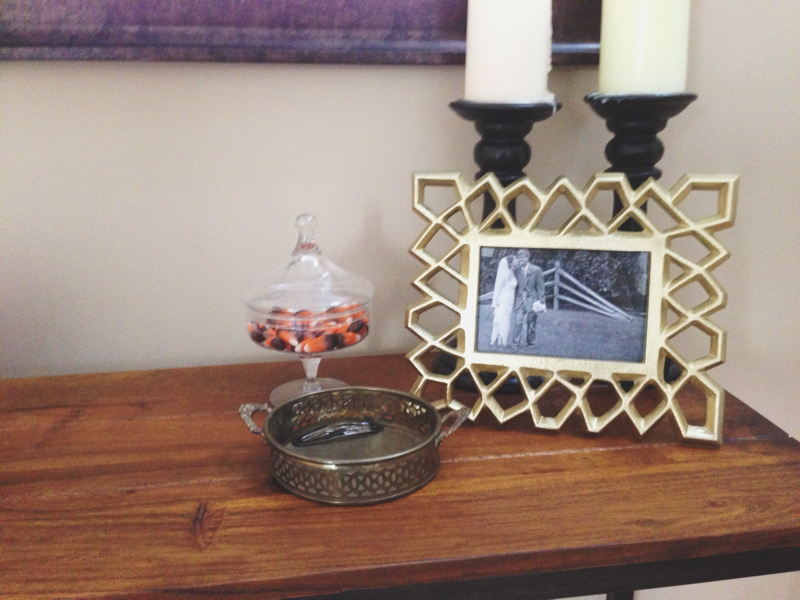 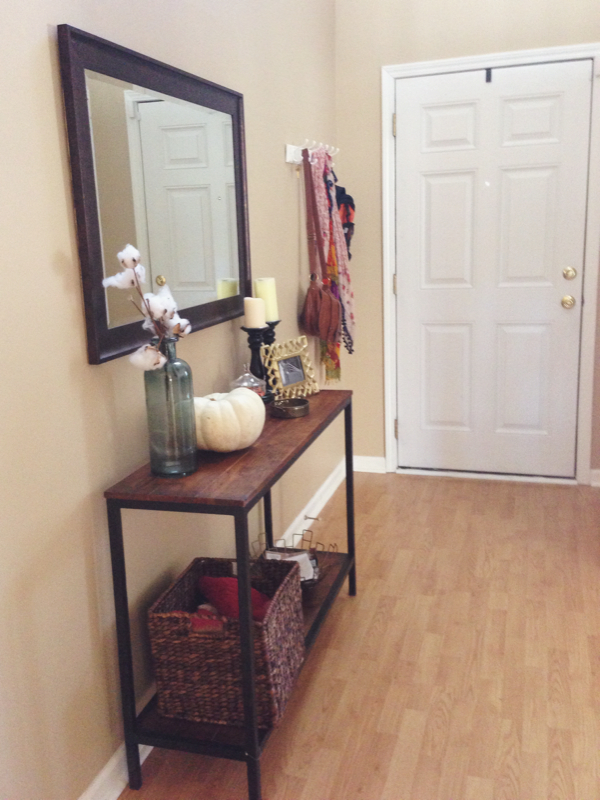 There isn’t a lot of space for mirrors in this house (aka, there are a lot of windows… a wonderful problem to have!), so I decided to put this mirror here to light up the space. There isn’t an outlet nearby (there’s a large pendant hanging from the second story) so to add length I used a vase (from West Elm) with some cotton branches. Other little trinkets include frame (from Target — I know, I shop there too much), candles, a candy jar with candy corn, and a pumpkin. The baskets underneath hold winter things, like gloves and hats and slippers, and mail. I will probably change it up eventually, but for now it works.

Here’s a picture of both tables, looking from the doorway: 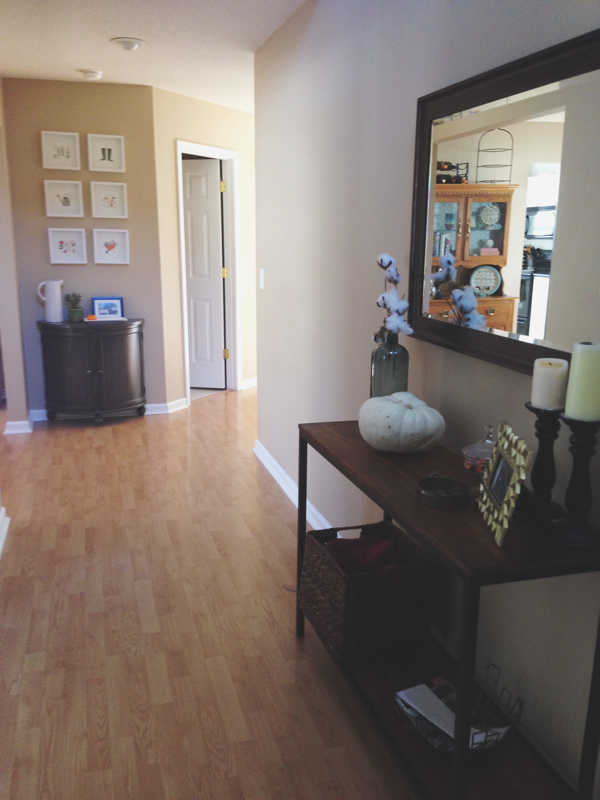 All I need is a rug, a storm door, a fresh coat of paint and I can call this hallway DONE. :) And thus ends the tale of two console tables.

What piece of furniture feels most “adult” to you? Do you have a console table in your home?