I have learned something about myself this year: I do not exercise on my own unless I have a race I paid for, a gym membership I am paying for, or a tangible goal that I have told a lot of people about. Basically, if my money or my pride are involved, I workout.

After I ran a marathon in January, I decided to give myself a two-week hiatus and then continue running to maintain my mileage up to at least five to six miles. Nothing too intense, but still a solid hour of running. Well it was cold in February and I got lazy in March and since I didn’t have to, I maxed out to three miles at a time and lost the long-distance endurance I had built.

And that’s ok — I gave myself grace. Afterall, I did run a marathon.

But slowly I’ve gotten out of the habit. I still exercise some, taking Leia for walks and running two miles or so, but it’s inconsistent and I am tired of making excuses, especially now that it’s darker and colder.

So here’s a specific tangible goal I’m sharing on here for December, in hopes that if I publicly announce it, I will do it. :) I will keep it small and manageable, because December has a way of getting really intense really fast, and leave the big goals for where they belong (the new year!). 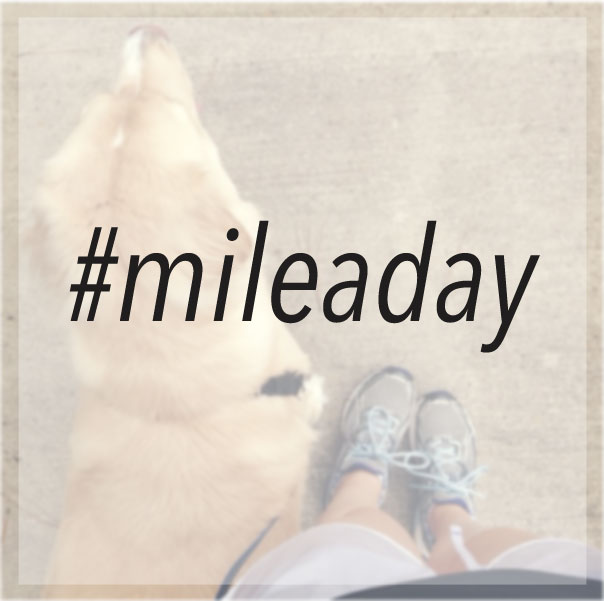 The Rules:
Walk/run for one mile every day in the month of December. Whether it’s walking one mile on your lunch break, or a record-mile run, the point is to get out and move for a mile.

Why December?
Why not December?
– It’s the darkest month of the year, so all of us are Vitamin-D deficient. Getting outside for 10-20 minutes will give much-needed Vitamin D to your body.
– It’s the busiest month of the year, so taking a short time of your day to walk will relieve stress and help collect your thoughts.
– You eat the most unhealthy in December, and studies show that those who exercise even a short period of time each day are more conscious about what they eat than those who don’t. (I’m too lazy to look up the studies, but I think I’ve read at least one once a season in Shape magazine for the last ten years.)

Want to join me?
Yay! Use the hashtag #mileaday if you want to participate via social media. (Update: I just saw that Elise had the same goal! So we’ll all be doing it together.:)

What motivates you to work out?