One of my best friends Allison (in like half of all my pictures) is having a baby in a month, and this past weekend a few friends and I threw her a shower at my mom’s house. I am trying to be better about a) taking more photos, and b) posting pictures sooner (still have on my list to post Thanksgiving and Christmas recaps – oy!!), so as soon as I downloaded these from my camera, I decided to put my favorites in a post to share. Because y’all — it was such a sweet shower. That baby boy has so many aunts that love him!

I also wanted to share because sometimes when you’re planning a party it’s hard to come up with all of the pieces from scratch and it’s helpful to see what other parties look like when you’re brainstorming. So here’s a recap of what we did for anyone hosting one in the future. :) 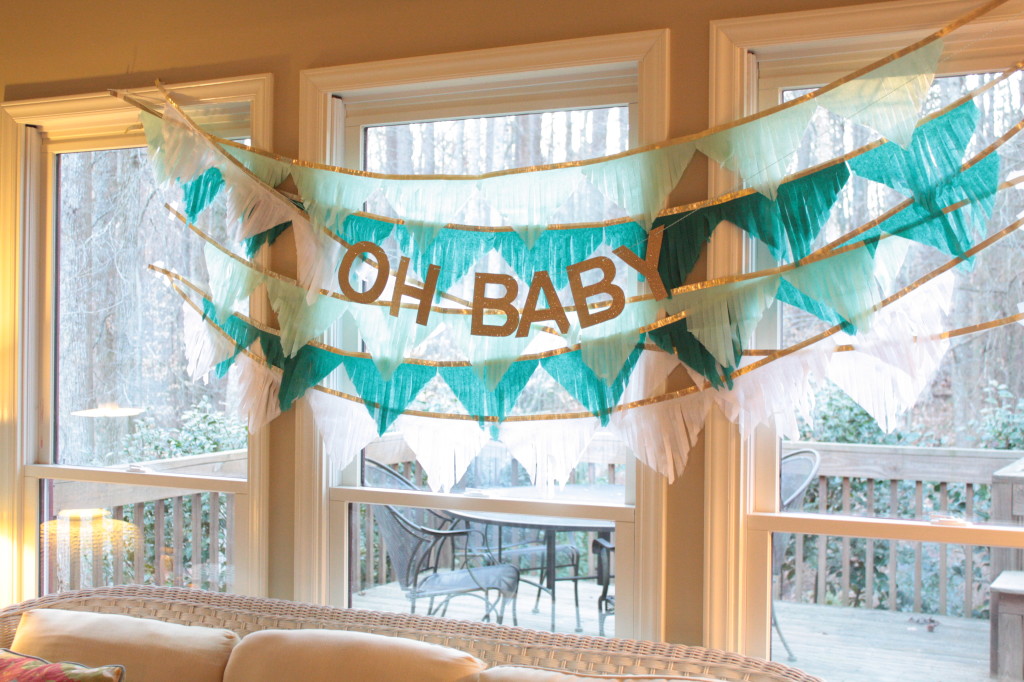 Decorations: We didn’t really have a theme, just a color scheme. Originally it was mint and gold, but as it happens when you order “mint crepe paper” online, sometimes it comes in teal. So it ended up a mint, gold, gray, silver, and teal party, which worked out beautifully. Allison’s sister Natalie made this cute backdrop for behind the couch, which looks good in this picture but way cuter in person. She hot-glued the tissue paper to a gold ribbon and said it was easy, but that looks like a fragile task if you ask me. :)

My sister Carrie made pompoms over the table, and a cute yarn pom-pom wreath and a sign for the french doors leading to the back porch. Allison has a woodland creatures decoration theme to her nursery, so we placed gold spray-painted pinecones around the table and incorporated some wooden circles as centerpieces. 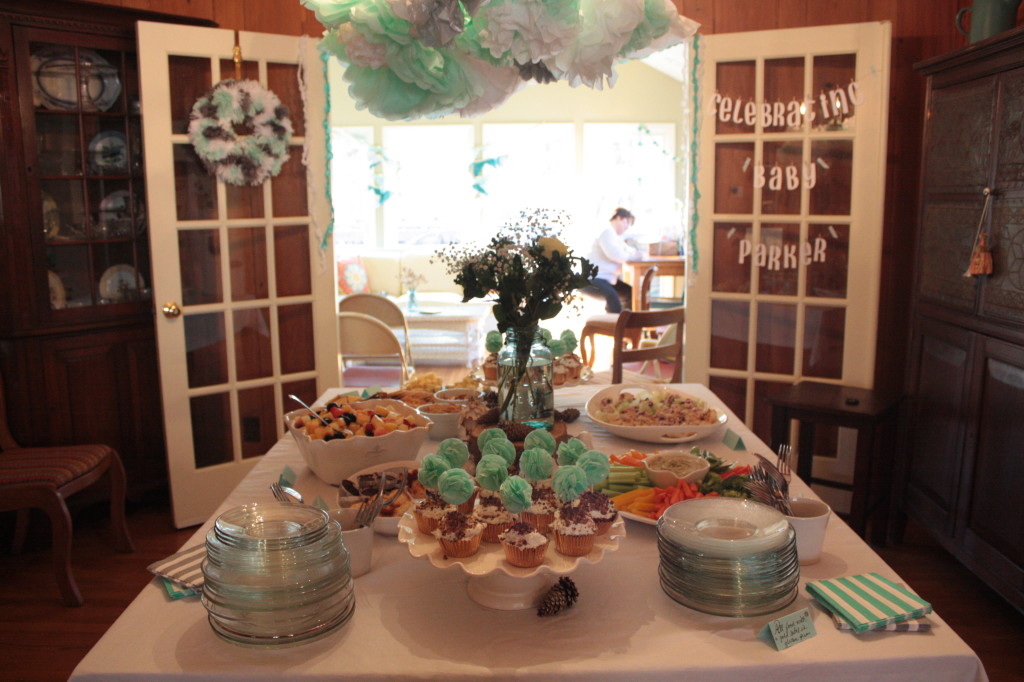 Menu: It was a 2pm shower, so the menu was pretty simple but tasty. A few of the guests and hostesses were gluten free, so we labeled all gluten free items with a gold glittery dot. We had:

I have learned it’s good to have a mixture of items that can be prepared two days ahead (chocolate peanut butter cups, buy the cheese, crackers, hummus), one day ahead (cupcakes, chicken salad), and the day of (coconut macroons, cut the fruit/veggies, make the icing). Spreading it out makes it all so much easier and stress-free. 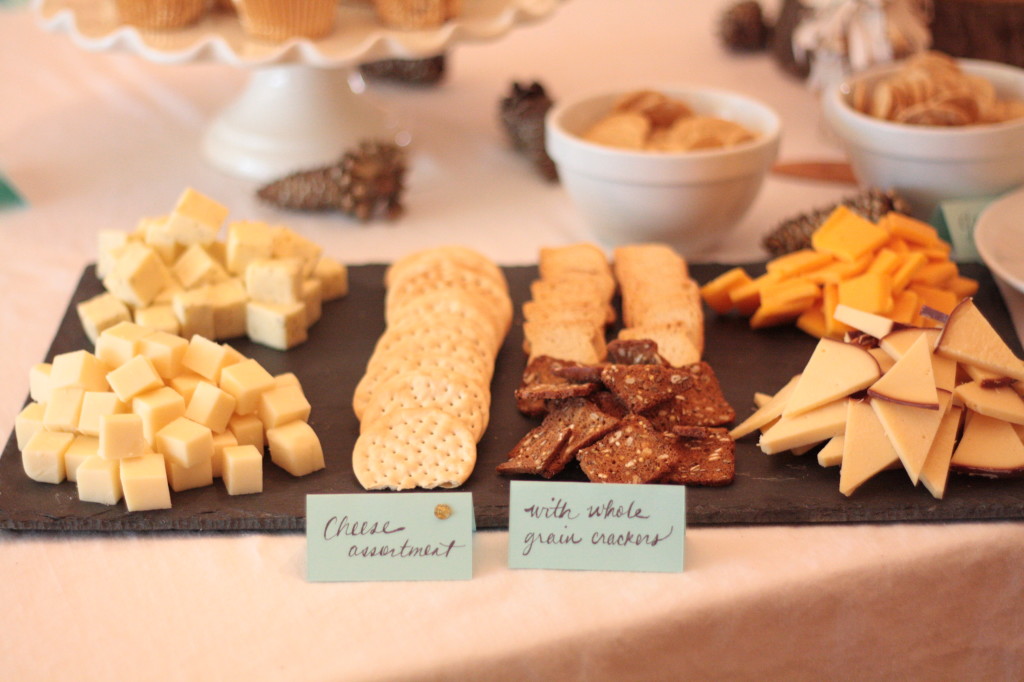 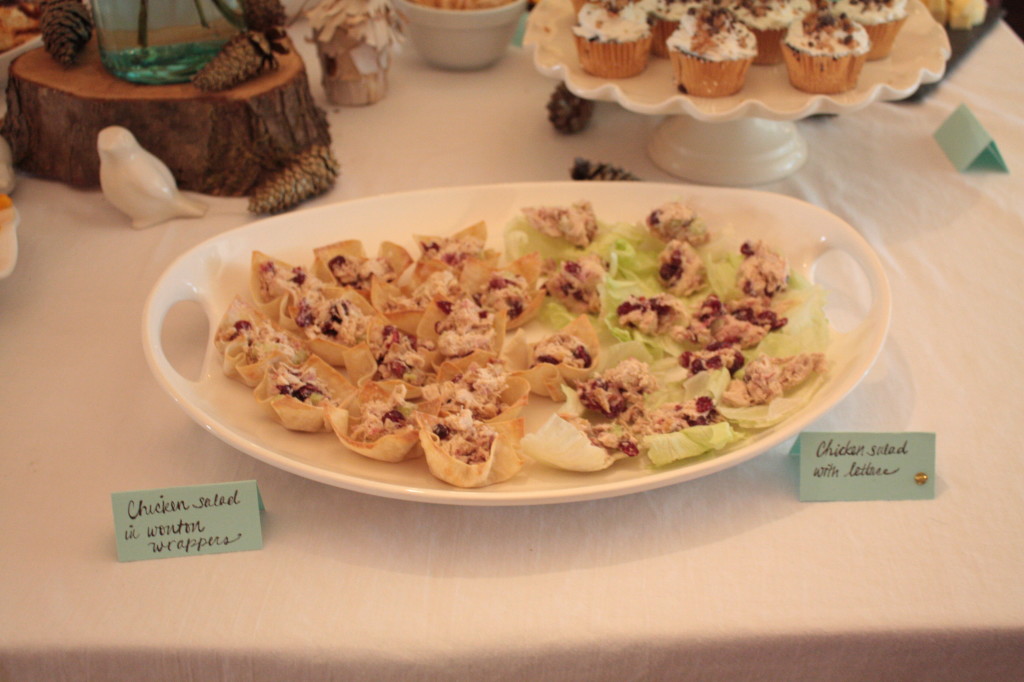 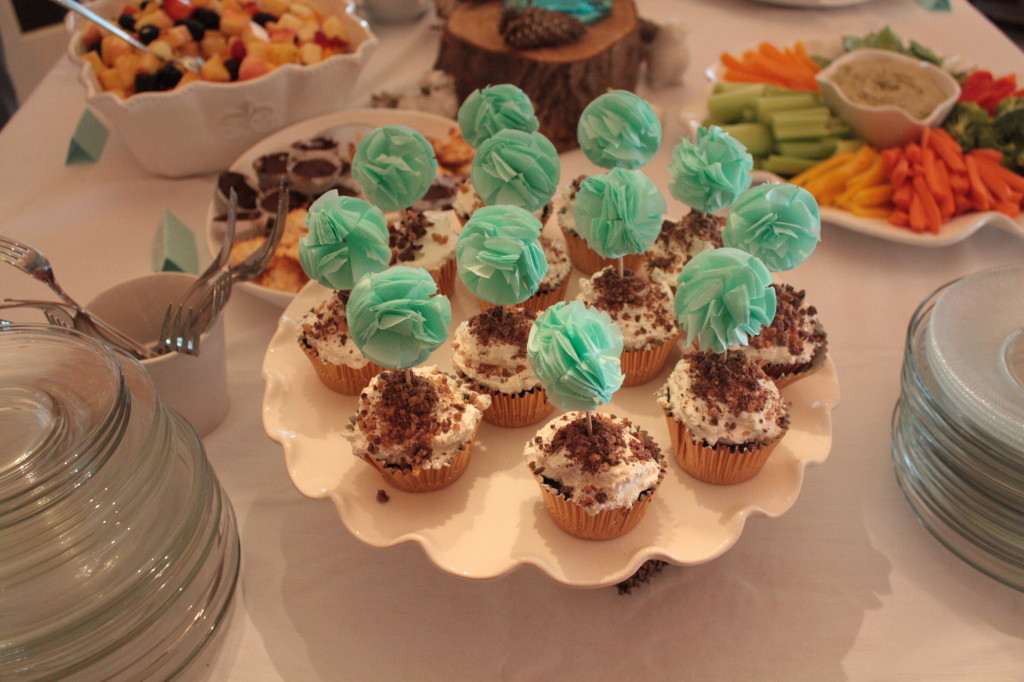 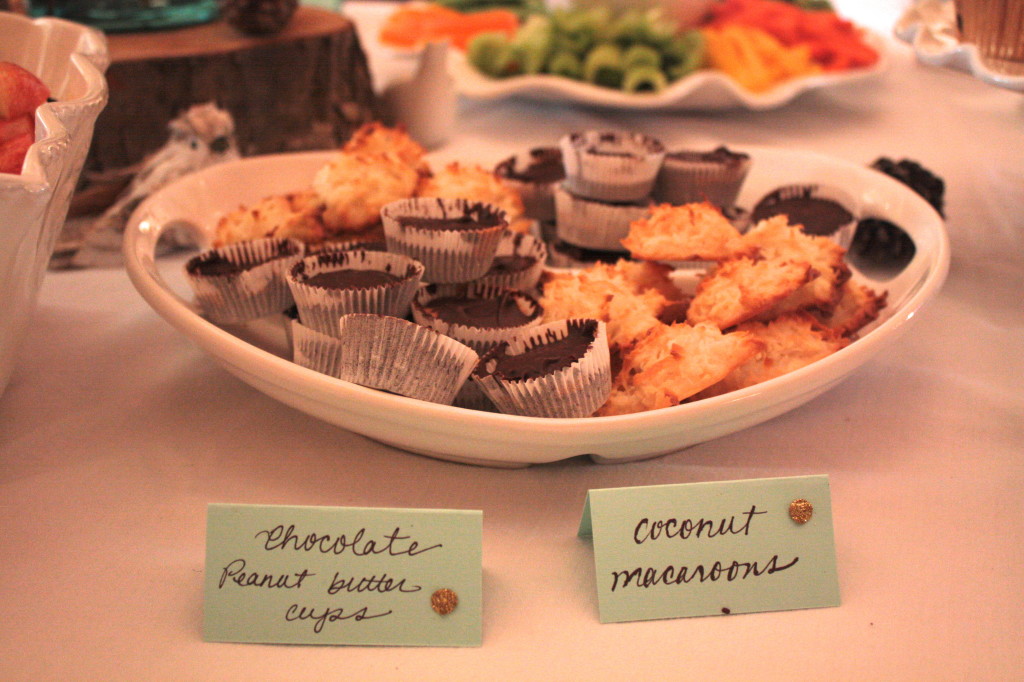 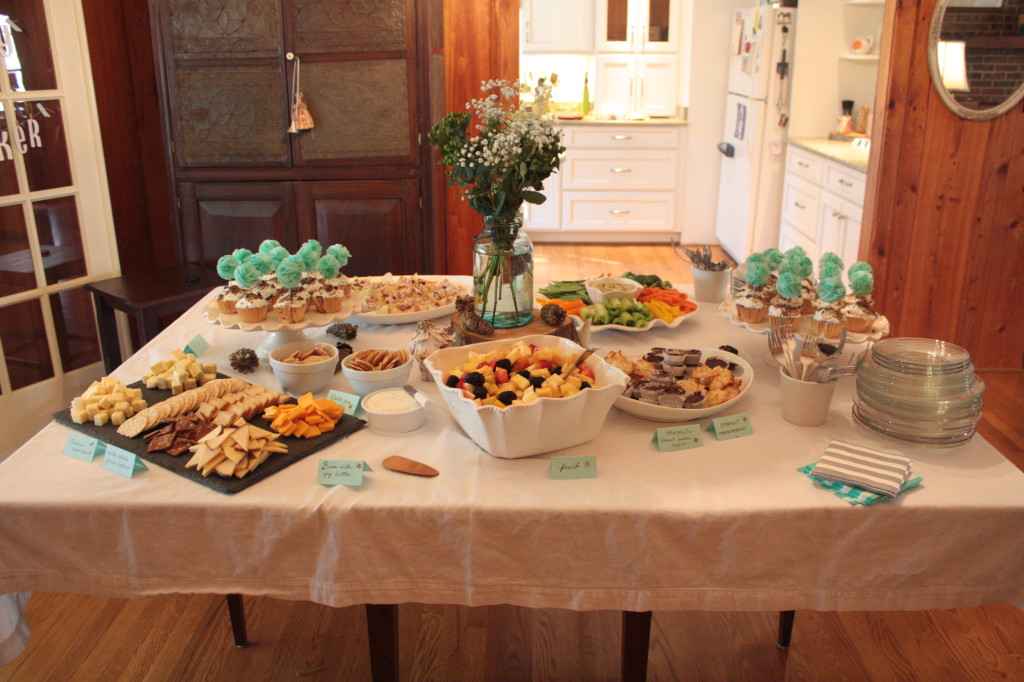 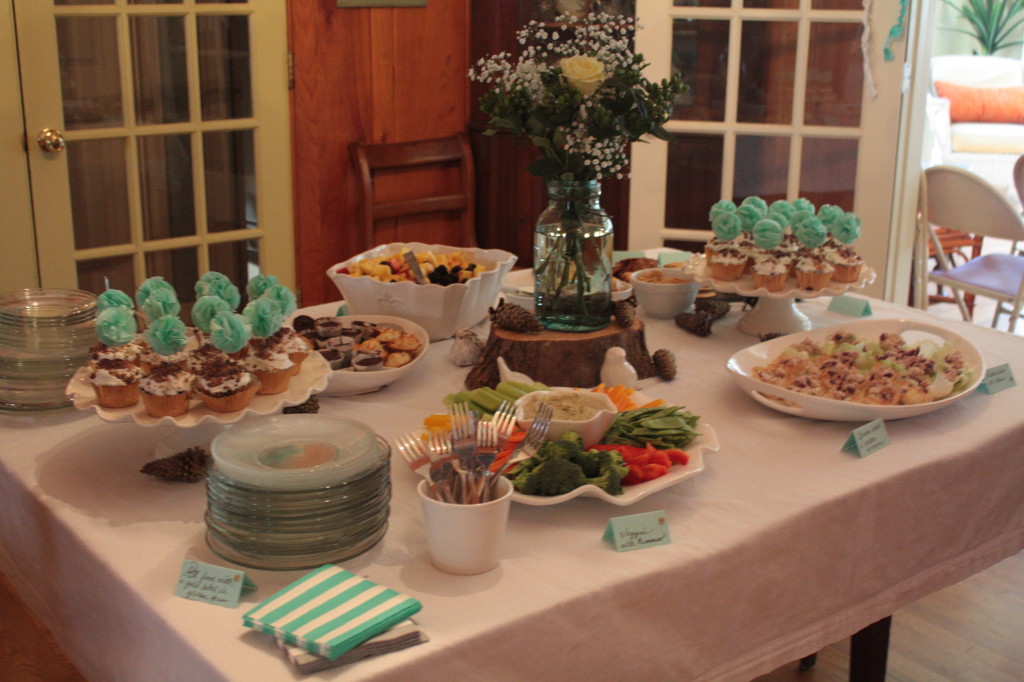 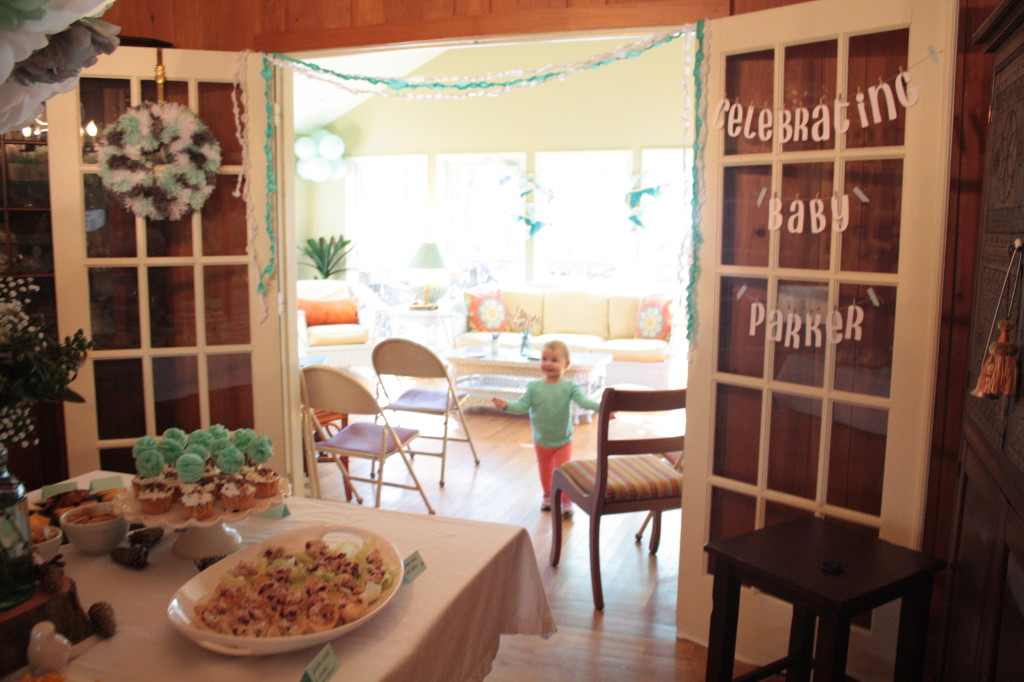 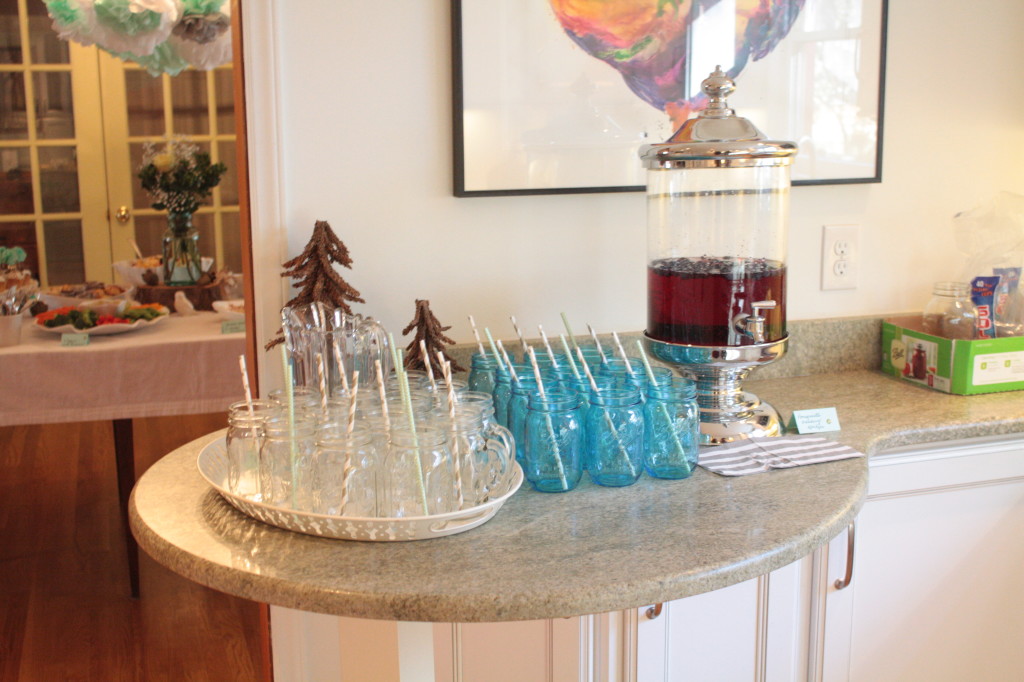 For drinks, we had a pomegranate-cranberry spritzer (just sprite + pomegranate juice + cranberry juice) and a hot chocolate bar (since it was a January shower). My friend Michelle was in charge of the hot chocolate and it was a hit! She had three different kinds of hot chocolate, varied stirrers and toppings. What I would do for a hot cup of chocolate right now… 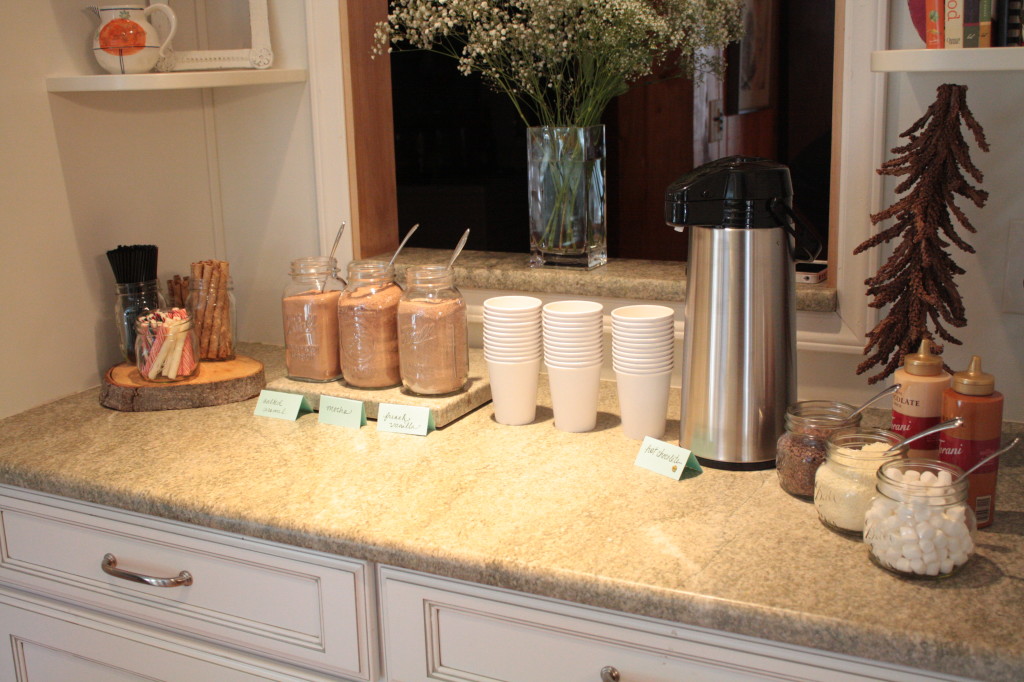 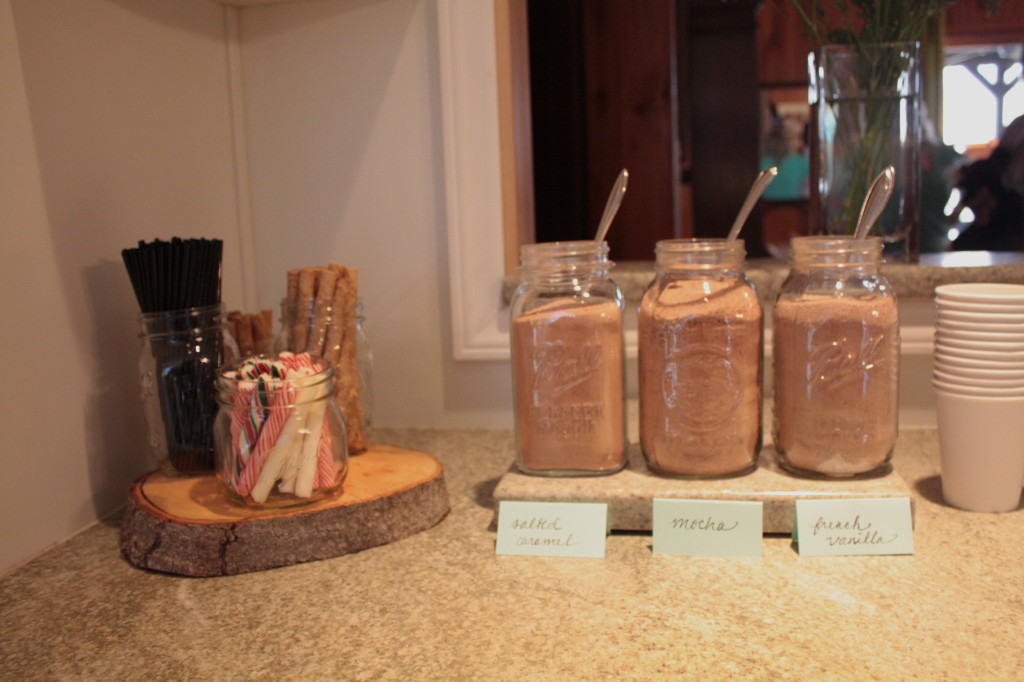 Games: In lieu of a big organized game, we had guests write messages on diapers. We also had little cards for guests to fill out answering four questions, which Carrie made into a little book:
– What to do when the baby is up at midnight
– A tradition to start
– Carry this with you at all times
– Always remember

After the party was over we all sat around the fire reading the funny and sweet messages people left. Lots of diapers will be changed by the dad very soon. :)

Favor: Natalie made gluten-free sugar cookies in the shape of onesies as a favor, although I didn’t get a good picture of them. But trust me, they were cute and delicious. 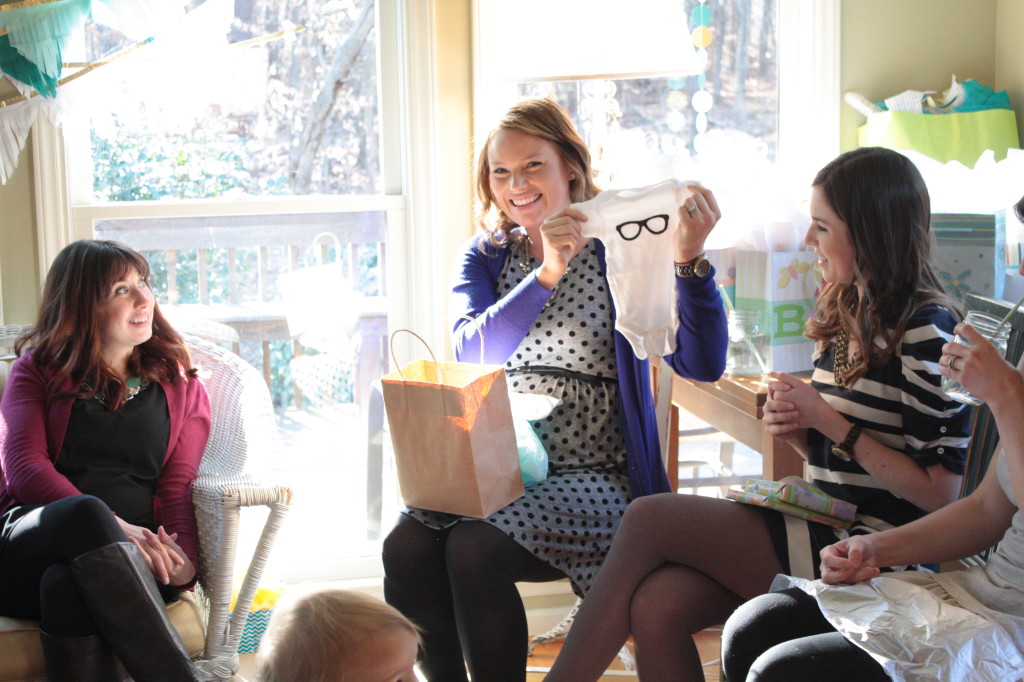 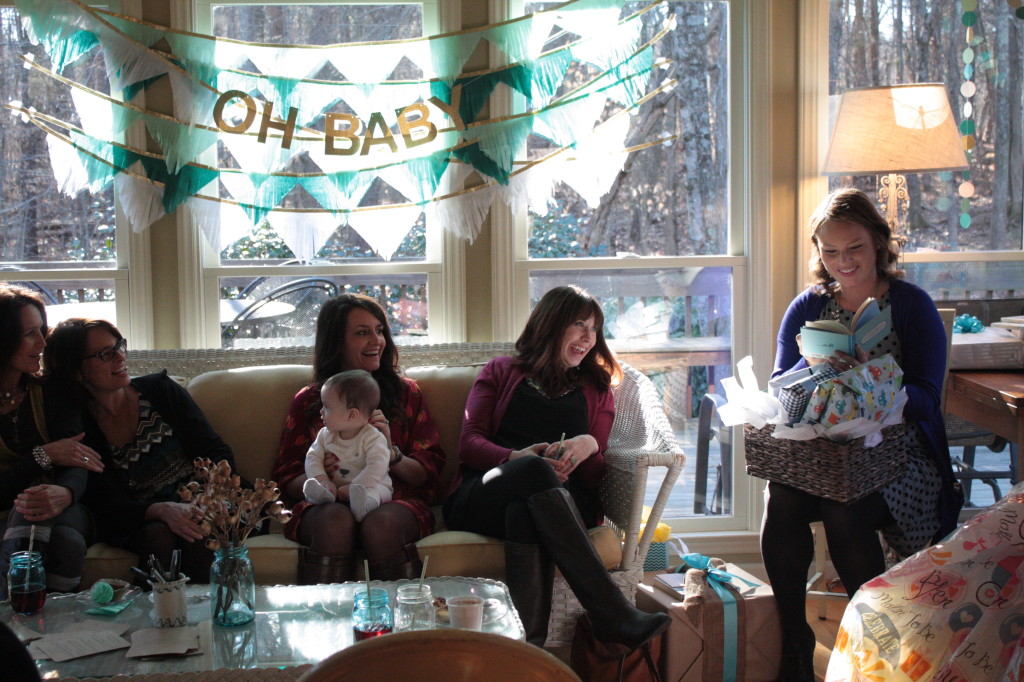 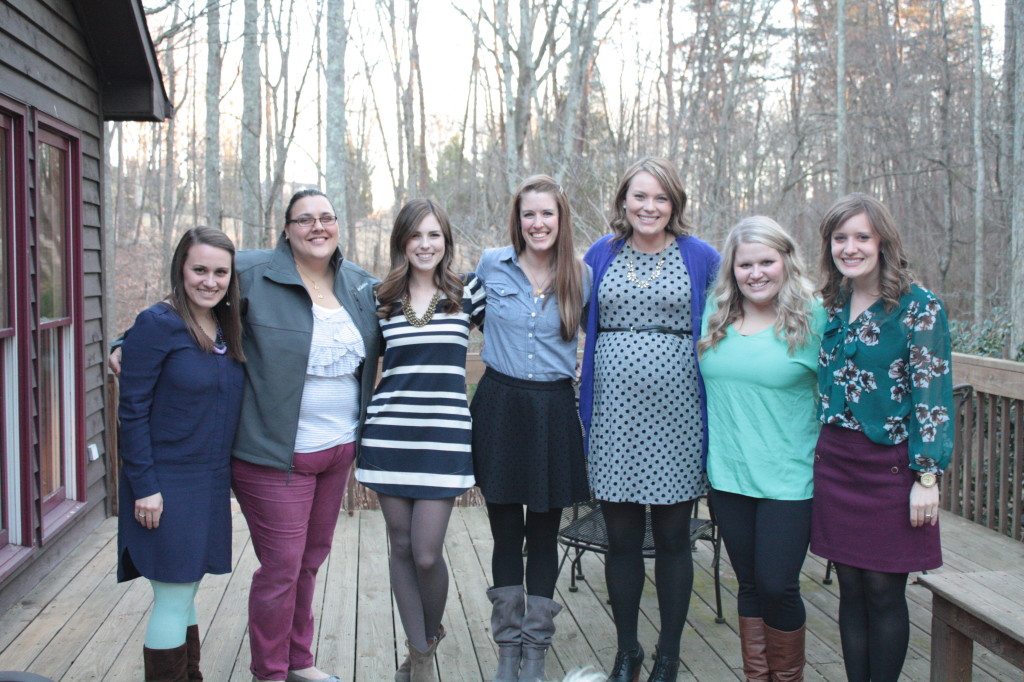 It was such a fun shower and SO good to see so many dear friends. I can’t wait to meet Baby Parker next month!