I have an important issue to discuss with you: gender equality in the cinematic experience.

It has been years since you have produced a timeless, quality chick flick.  I can count on one hand the “girly” movies I have enjoyed in the last few years, and most of them are lackluster compared to the ones produced a decade ago. What happened to really good romantic comedies?

Guys, on the other hand, have plenty of action-packed movies hitting the theaters. It is very clear who your target audience is these days. Within two months my husband has seen (or wants to see), X-Men, Godzilla, Spiderman, Edge of Tomorrow, and Transformers. And every season seems to be like that! I’m being dragged to so many “guy” movies but there are zero I can drag him to. I am not keeping score, of course, and don’t mind seeing action-packed movies once in a while, but seriously — what happened to really good romantic comedies?!

To be fair, you are producing chick flicks. But they all seem to be lacking… longevity. I haven’t seen a movie and thought I want to own this and watch it over and over and again in years.

I’m aware I may be the minority of women and it may be that I am just super picky about romantic comedies.

The criteria for a well-done chick flick includes:

Basically I’m looking for the next When Harry Met Sally. 10 Things I Hate About You. You’ve Got Mail. Julie and Julia. While You Were Sleeping. Steel Magnolias. Pride and Prejudice. Sleepless in Seattle. Something’s Gotta Give. The Holiday. Love Actually. The Devil Wears Prada. 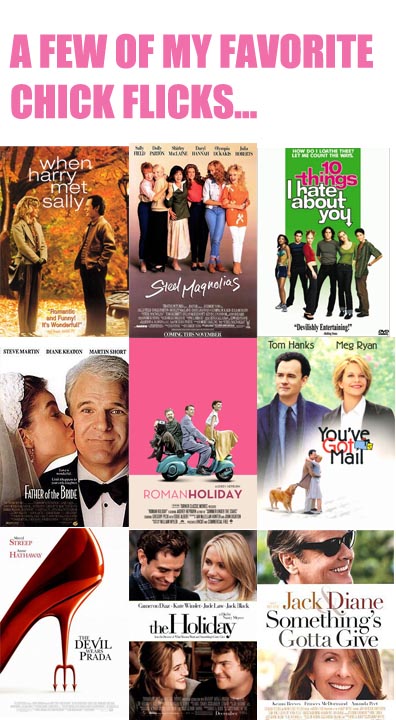 Four of those movies were directed by Nora Ephron, who died in 2012, so maybe we just need a new director to step up and write beautiful romances again. Or maybe I’m nostalgically pining for the movies that made me fall in love with love, since most of these were released over a decade ago.

But Hollywood, please consider bringing back quality chick flicks. I understand they are not your bread and butter, so don’t expect a blockbuster every season, but maybe just one beautiful film a year? Is that too much to ask?

What do you think? Am I being too picky, or do you agree? What was the last really good romantic comedy you’ve seen?