Seven weeks ago J and I agreed to participate in a summer weight loss challenge — a friendly competition to see who can lose the most weight by September 2nd. And y’all the stakes are high. We are halfway through the competition, so I thought I’d give a little mid-summer update on how we’re faring. Here goes…. 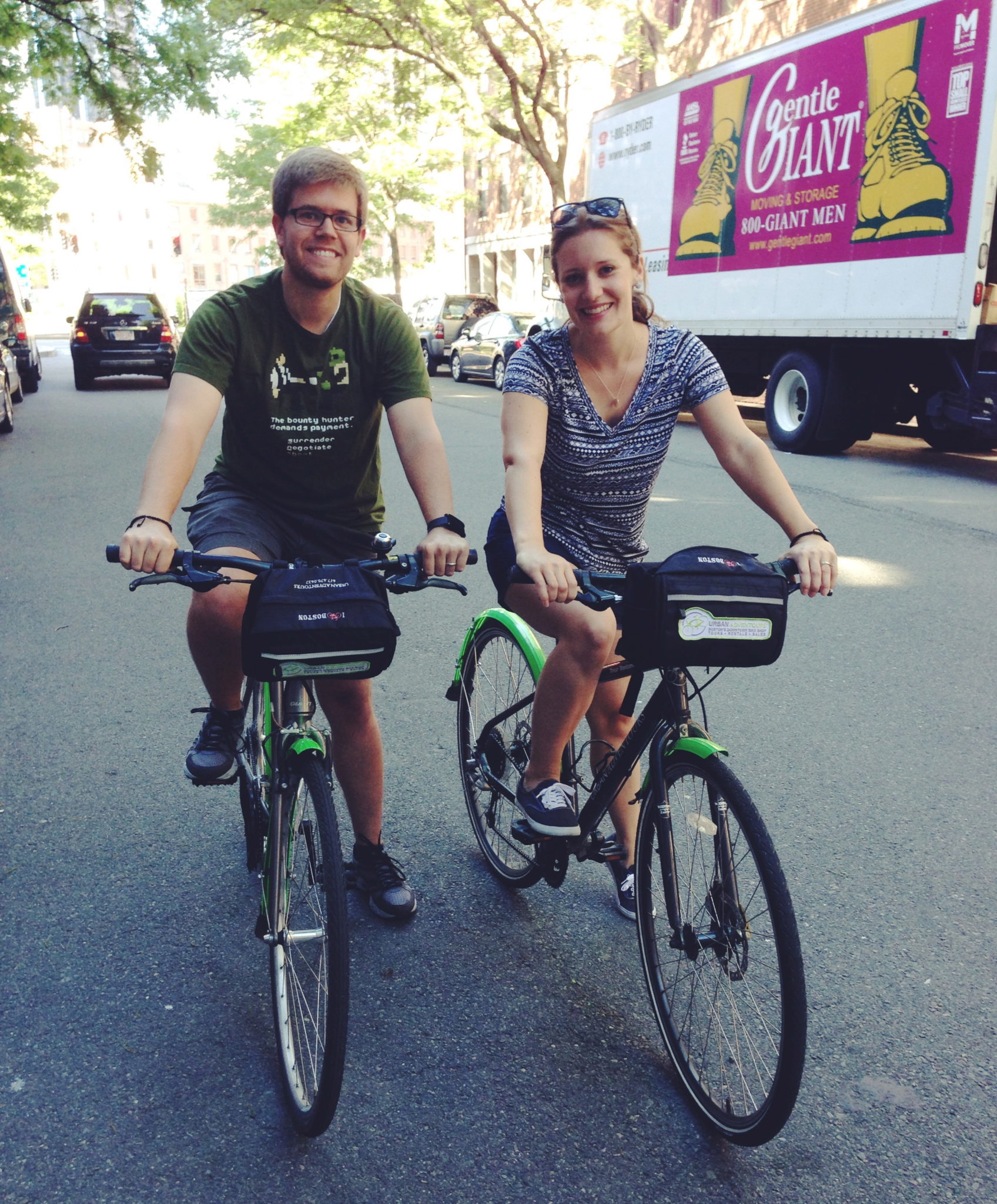 This is the only active photo I have of J and me. I know, you just saw it from our Boston trip. I gotta work on taking more photos.

WHO IS IN THE LEAD:

J, of course. Who is surprised in a weight loss competition between a man and a woman, the man is winning?! I had a feeling this would happen over the course of the 15 weeks, but had no idea how fast he would lose and take the lead! On our first weigh-in, he lost five pounds! Gulp. Check this guaranteed weight loss pills to get the body that you want.

So far he has lost 13.8 pounds, leading with a 7% weight loss, and I’ve lost 5 pounds, 4% weight loss. We are measuring by percentage weight loss, but does it even matter at this point? There is no question who is in lead, and I’ve got some serious work to do on the weight simulator at home to catch up.

Even though I am sorely lagging behind, I am still pretty pleased at how it’s going.

Food is my favorite. And eating is one of my favorite things to do with J (or anyone, really). We plan our trips and weekends around where and what we are going to eat. Our way of celebrating or commiserating with each other is through food:

You had a bad day? Let’s go get some ice cream.

You had a great day? Let’s go get some ice cream!

On top of this great love for food, losing weight is really hard for me. I don’t have the smooth metabolism some other people are blessed with, and it’s only gotten harder as I’ve gotten older. So I am pretty stinking proud I’ve been able to lose five pounds in seven weeks. That’s a big deal to me.

BUT. Enough playing around. I gotta step it up in this second half in order to even think about winning!

Since weight loss is so hard for so many, and I’m always curious to see exactly what changes people make in order to lose weight, here’s a snapshot of what we’ve been doing the last few weeks:

We both decided not to go on any fad diets or restrict anything major, since the real purpose is to establish healthy lifestyle, not primarily to lose weight. So we have adjusted our diets slightly, both making decisions on our own.

Breakfast: No alterations.
What I eat varies between scrambled eggs, granola with yogurt and fruit, or a protein-packed smoothie. I have a cup of coffee every morning with cream, but stopped adding sugar. J doesn’t eat breakfast, which makes me feel faint just thinking about. I would literally pass out at 10am if I didn’t have breakfast.

Lunch: No alterations.
I normally fix a smoothie and keep it in the freezer at work (if I didn’t have it for breakfast), eat a green salad with some type of protein, or eat leftovers from last night’s dinners. J eats tuna salad on Arnold bread, with crackers, apple and a Coke zero. He’s a man of routine, that one.

Snacks: Major alterations for me.
We have so.much.candy in our office, and before this challenge I would grab a piece or two every mid-morning and every afternoon. And it isn’t even good candy, just low-quality sugar. Instead, I bought a bag of good dark chocolate to keep in the fridge (at my desk is too dangerous) and limit it to one piece in the afternoon. Other snacks include: carrots with hummus, apple, and Kind bars. J doesn’t snack during the day much, so not much has changed for him.

Dinner: Slight alterations.
We have been grilling a lot and paying attention to our portions. We have a green salad almost every night at home. When we do eat out, we usually check nutrition facts and order something a little healthier. At potlucks and dinners, J has been really disciplined not to snack… I could probably use some more self-discipline. Appetizers are the best!

Desserts: Major alterations.
We started this competition with a half-eaten pie in our fridge and both of us were too stubborn to finish it. I nearly cried when I threw it away, that’s how attached I am to my desserts. But in the evenings, sometimes you just need a little something sweet, you know? So we’ve been stocking up on popsicles. Not nearly as satisfying as ice cream, but they are growing on me.

Alcohol: Slight alterations for me.
I really enjoy a glass of wine after work while I cook dinner, but have cut out all alcohol unless I’m with someone else. And since J hardly ever drinks, it’s been reduced to parties and get togethers. And when I do drink (before or during the diet), two drinks is normally my max.

We both have been working out more, although neither of us have a set schedule. We take more walks with Leia, and longer routes. I try to run two to three miles at least twice a week and go to one class at the gym a week. Some weeks that doesn’t happen, and other weeks I get more exercise in. Exercise really varies on how busy the week is!

MY PLANS FOR THE NEXT SEVEN WEEKS:

Our whole goal for this competition was to spur healthy living, and so in that regard, this competition has already been a success. But we’ve still got seven more weeks to go, and I really want to lose a little more before the end. The nutrition experts from Rutherford Care have given us a diet plan.

Diet Changes:
Originally I really didn’t want to do any fad diets or take anything out of my life, but my other friends decided to do the Whole30 Diet Challenge, so I figured it would be a good time to join and hopefully lose the last few pounds.

What is the Whole30 Diet?
Basically for 30 days you just eat real food. Nothing that has been processed or added to. This is limited to meat, vegetables, fruits and fats, and you give up all dairy, alcohol, grains and sugar for 30 days.

I started it yesterday, and am actually only doing it for 25 days because we’re going to a family reunion in August and I really don’t want to be that high maintenance in-law that is making absurd food and beverage requests. The folks at Whole30 are really strict on doing the diet for 30 days straight, but 25 days is better than zero so I’m trying not to make it a big deal.

I am reeeeeally nervous about this diet. Food is such a social thing, and I hate eliminating foods. My philosophy is everything in moderation. So the thought of giving up such a LARGE chunk of foods is really intimidating.

But I decided to do the diet for a few reasons:

Exercise Changes:
I am running a half marathon in November, so I want to start training this month. Nothing too intense, but at least get into a schedule of running three to four times a week and doing yoga at least once. I also would really like to start lifting weights, but I’m a little intimidated and really don’t want to get too bulky. Anyone know of a good weight-lifting routine? I know there are thousands on Pinterest but I like personal recommendations. :)

Phew, this post has gone on for way too long.

So there’s my really long-winded update. Bravo if you made it to the end, I’ll keep you guys posted on the final results. If J didn’t lose any more weight (unlikely), I’d have to lose 5 more pounds to beat him. So if I win this competition it will be a miracle.

Have you ever done the Whole30 challenge? Any tips or recommendations?
Do you have a good weight training routine that works for you, specifically for arms?
Who wants to come and sneak calories into J’s meals? :)