Welp, I’m done with the Whole30 challenge. (Or rather Whole25, since I didn’t make it to the bitter end due to a trip I really wanted to enjoy. If you’re a strict Whole30 follower, give me grace. 25 days > 0 days.)

For those who aren’t familiar with Whole30, the basic gist is to eat real, whole foods. Nothing packaged or processed, which excludes all dairy, alcohol, grains and legumes. You can eat meat, vegetables, fruit, nuts, oils and herbs. It’s basically a paleo diet, except without any paleo-like treats or snacks (so no honey or syrup). The point of the diet is to eat food that makes you healthy. Eat for fuel, not for fun. Read more about the challenge on the Whole30 site.

I had four objectives for starting this challenge. Let’s see where we are today: 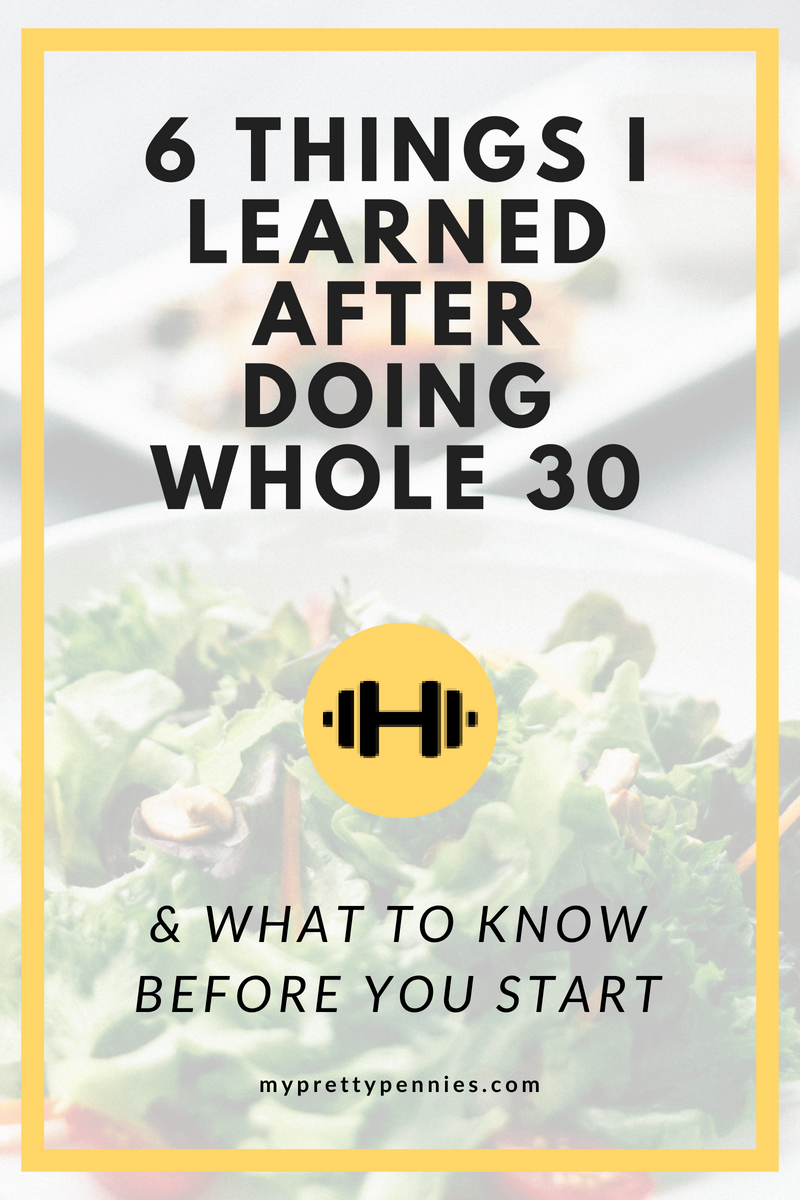 Lessons from the Whole30 Challenge:

Lesson #1: Your body may be willing, but your mind is CRAZY.

Literally crazy, my friends. I have never given up sugar before and had no idea the mental energy and stamina it requires to say no to something so near and dear. People compare the physical process giving up the addiction to sugar as painful as giving up cigarettes or alcohol. I was so tired and haggard the first few days, and I think most of the exhaustion was the mental energy it takes to say no to something you love. It was a test in the first few days to see whether I was really committed, and I literally had to take away the option of cheating out of my mind. I was in it for the duration, no cheating and no exceptions.

You can have coffee on this diet… but that’s about it. No cream, sugar, artificial sugar/cream, or packaged almond milk. They discourage a lot of caffeine, so I decided to make my morning cup of joe with half decaf, half caffeine. The first day — YUCK! GROSS! NO. I finished about a fourth of it and pour the rest out. The second day, same thing. Third day, I finished about half. By day ten I finished my cup of coffee and had an epiphany that I finished the whole thing and didn’t wince during any of it. Breakthrough! And today, I can proudly take my coffee black. Boom.

Lesson #3: Our life does not fit around standard one-week meal plans.

Maybe your household is different, but I have learned we can’t follow one-week meal plans exactly. It’s way too much food for the two of us, and cooking an entirely new recipe every single night after I get home from working a full day is exhausting. We gotta have leftovers some week nights.

I used the book Practically Paleo as my guide for the diet, since all of the recipes except for the desserts were Whole30-approved. The book has really nice 30-day meal plans, so I decided I would follow the meal plans and make whatever it assigned for each meal. I downloaded the first week grocery list, brought it with me to Trader Joe’s and bought everything I didn’t have on the list. $100 later, I brought home an entire week of breakfast, lunch and dinner items. We used half of all I bought in that week. Maybe less. (FYI: I highly recommend reading Practically Paleo if you’re curious about this eating plan or if you suffer from gastrointestinal issues. I also read the book Whole30 was based on, It Starts With Food, which was good, but not nearly as helpful as PP.)

Lesson #4: If you don’t like something off a diet, you sure won’t like it on a diet.

Similar to lesson #3, if you are following a meal plan and you see a recipe that includes an ingredient you don’t like, omit it from the recipe, or skip it. I made the mistake and bought foods that I don’t really like thinking maybe my taste buds will change on this diet. Hahahahah NOPE. Cauliflower is still as gross on the diet as it is off. I think it’s good to experiment with different flavors and tastes, but if you know you don’t like something, omit that from the meal plan. There are only a few things you can eat, so make sure to fill your meals with things you enjoy.

Lesson #5: It’s expensive, but it doesn’t have to be that expensive.

Eating healthy is more expensive than eating crappy. That’s just a fact. Mainly because fresh foods expire quickly and unhealthy foods can be filled with preservatives and chemicals that are cheap to produce, taste good and make foods last longer. Ever wonder why Cheetos expire 18 months from now?

You know me, I’m always trying to save a buck. For a long time spending money on food felt like a waste, especially when I got out of college and was forced to create my own budget. Why am I spending hundreds of dollars on food when I could buy clothes!

But what you put in your body is so important, that I think it’s worth spending more on quality food. It makes you feel good, and will save you lots of money down the road in health bills. So it’s expensive, but I don’t think eating right has to be that expensive. I bought a LOT of meat the first week, but realized that I could spread out the meat more with salads and vegetables dishes that just required a little meat. Also, I discovered some really delicious meals with canned meat that were super cheap. I plan to post a little more on what I eat each meal and share some of my favorite recipes.

Lesson #6: You always have a choice.

Food is so social, and I love enjoying good food with friends. The hardest part of the challenge by far were social events. I strategically planned to do the challenge when we had little plans, but there were a few parties and events that I had to mentally prepare for. I thought that if I was on a diet, people I was with wouldn’t enjoy themselves as much, and I really hate being high maintenance and picky about what people serve. But really, it was just hard for me. No one else was seriously inconvenienced by my diet (except maybe J, since he had to eat what I cooked, had way more dishes to clean, and listened to be talk about this diet for 25 days). I made sure to bring my own food, or tell people ahead of time. It never was a big deal if I didn’t drink alcohol, and it goes back to the principle that people don’t think about you as much as you do. I learned that I always have a choice on what I eat and drink, and I never need to let people choose that for me.

I want to keep going.

This is the very first diet I have ever done where I didn’t exhale a sigh of relief and then immediately inhale ALL OF THE FOOD. I had a lot of anxiety approaching the diet — nervous about what I was giving up, etc. — and I actually had the same anxiety as I approached the end of it, uncertain about what I was going to include back in, because I felt so good and liberated.

I love that food doesn’t have (as much) power over me. I think that’s the point of intermittent fasting — it shouldn’t be a diet but a lifestyle. Food certainly still has a strong hold, but not nearly as much as before. Are you considering intermittent fasting? Read this FastingApps blog to learn everything about it.

So does that mean I am joining the ranks of those who ban all dairy, grains, legumes, sugar, alcohol and fun? Heck no, life is way too short to give it all up (unless you have a serious medical condition and need to). But I do want to maintain a 85/15 ratio between paleo and non-paleo foods. My goal is to eat paleo for breakfast, lunch, snacks, and as much as possible for dinner and at parties and events. I loved the way this diet made me feel about my body and my mental victory over food, so I want to continue along that path.

Have you completed the Whole30 diet before?
What were your main takeaways?
Did you get the “tiger blood” they talk about in the Whole30 timeline?

PS – Read more on why I started. Coming soon: meal plans and my favorite recipes I ate this past month. :)