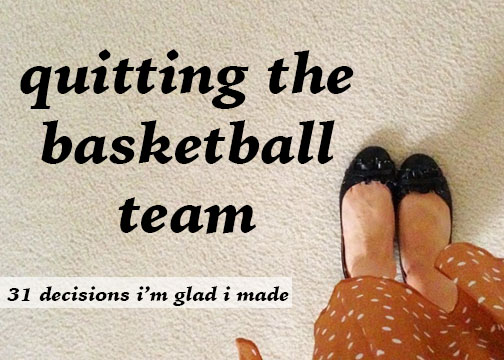 Quitting the basketball team in high school was a good decision.

If you know me in real life, you’d probably wonder why anyone would let me play basketball in high school to begin with — I’m 5′ 3″ (with kitten heels on) and have zero coordination. But I went to a small private school and they needed warm bodies. Plus, most of my friends were on the basketball team, so I joined to hang out with them.

Well, I didn’t hate all of it. I enjoyed hanging out with my friends before and after practices, caravaning to games together, hanging out with the guys basketball team… but that’s about it. The practices, the scrimmages, the actually playing basketball was awful. I was really only decent at defense, which may have worked if the sport was football, but subbing out a player every time our team had the ball was not the best strategy. I contributed a total two points to our team.

So after one season, I quit the team. I became a statistician instead, which was WAY more up my ally. I still got to go to all of the games, hang out with my friends, but didn’t have to put on that awful jersey ever again.

PS – Shoes are from Target, a long time ago.