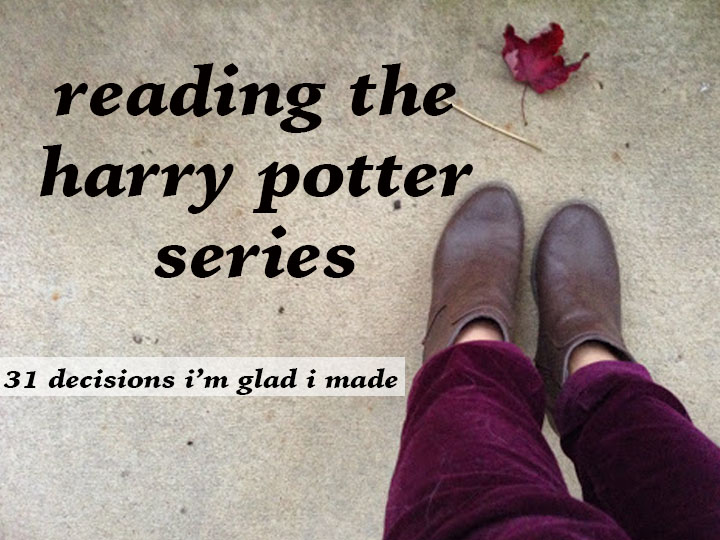 In the summer of 2007 I was living in Boone and about to study abroad in Europe for a month. It was a really boring summer. Most of my friends had left, and I had an abundance of free time only working a part-time job and no school.

So I started reading Harry Potter.

My friend Catherine was reading the series at the time, and she was one book ahead of me, so she would loan me the next book as soon as I finished one. For about two weeks I did very little. It was SO GOOD. The stories, the characters, the plot. Really the best. I’m actually kind of jealous when I think about someone reading them for the first time, because the story is that good, I’d love to experience its newness again (does that make sense?).

I finished the sixth book, and was in agony that I had to wait for the seventh and final. After reading the entire series one after another, it was torture to wait. (I know, there are probably Harry fans reading this who waited years in between each book. Kuddos to you my friend! That is some serious patience!)

The seventh book came out while I was in Munich studying abroad with a business class. There were three of us from the group who were Harry fans, and so we slipped out to the Munich train station at midnight and got the final book. Then the three of us spent the next few days reading the final book on train rides and in between tours. It was magical.

Harry Potter was one of the first things J and I bonded over when we first met. He loves the series as much as I do, and we both re-read the seventh book on our honeymoon just for fun. This sounds super nerdy, but leading up to the final movie, we planned a whole week of Harry Potter. We watched one movie a night up until the eighth and final movie. That was one of the funnest (and laziest) weeks of our marriage.

It’s the series that I hold all other series to, and I’m afraid all others will forever fall short. Truly brilliant.

Any other Harry fans out there?

PS – Shoes are from TJMaxx a couple of years ago.