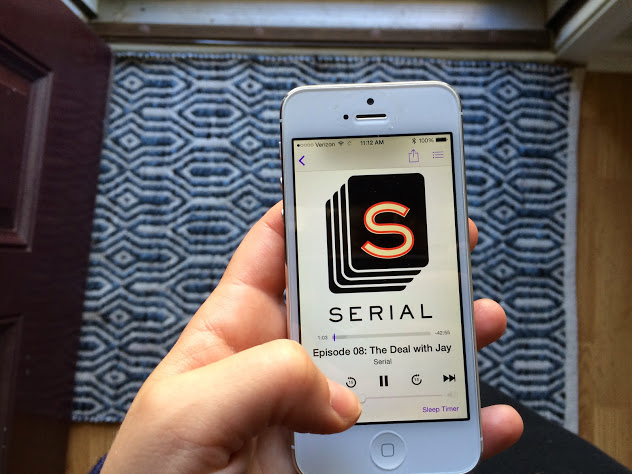 Soon after sharing what podcasts I listen to, I saw Ira Glass on The Tonight Show with Jimmy Fallon, and he shared that he was helping to produce a new podcast called Serial. It follows one true story over the course of a whole season.

One weekend in October I was taking a trip to Charlotte, so I decided to download the first three episodes and listen to help pass the time. WOW. I was hooked. It is such an interesting case, and the host, Sarah Koenig, is such a great storyteller.

Here’s the gist of the case, taken from the Serial website:

On January 13, 1999, a girl named Hae Min Lee, a senior at Woodlawn High School in Baltimore County, Maryland, disappeared. A month later, her body turned up in a city park. She’d been strangled. Her 17-year-old ex-boyfriend, Adnan Syed, was arrested for the crime, and within a year, he was convicted and sentenced to spend the rest of his life in prison. The case against him was largely based on the story of one witness, Adnan’s friend Jay, who testified that he helped Adnan bury Hae’s body. But Adnan has always maintained he had nothing to do with Hae’s death. Some people believe he’s telling the truth. Many others don’t.

A new episode airs every Thursday morning, and I look forward to it like a TV show that ended on a cliffhanger.

Does anyone else listen to Serial? What’s your theory? Do you think Adnan did it?

My thoughts: I really want to believe he is innocent… but then who else would have done it? And why? It all makes no sense, and I totally can relate to every single question and frustration the host voices. Ah! Can’t wait for the next episode.