I’ve started and stopped this post dozens of times throughout the last few months. Not because I don’t know what to say — there’s plenty of things to catch you guys up on! — but I always got distracted or was tired of looking at another screen after my work day. But here I am parked at Panera with a friend who has her own work to catch up on, so I thought it would be a good time to finally update this blog. :) So I’m just going to type away all that I’m thinking and then hit Publish.

Let’s get going shall we?

Well, for starters, I’m pregnant! If you follow me on social media you probably know this already, but we are expecting a baby girl in April. I am so excited I cannot even handle it. Every time I feel the flutters in my belly (which lately has been often) I am full of thanksgiving and praise. What a miracle life is!

After our miscarriage in the spring, a few friends asked whether I was willing to try again so soon after such a traumatic experience, but my feelings were the opposite — all I wanted was to be pregnant again. Not to replace the baby we lost, but because I just wanted to be a mom so badly.

We found out about this little April miracle on August 7th, which we realized later is the anniversary of the day we got engaged.

I have had so much peace about this pregnancy, which is truly a gift from the Lord. From the very beginning I have had a strong sense that I am going to get to meet this baby. A few weeks after we found out I had a little scare, very similar to the series of events that occurred in my first pregnancy, so we scheduled an appointment to see the baby earlier than expected. We were delighted to see the baby was developing well and had a strong heart beat.

J and I were convinced we were having a boy from the beginning, but thought it would be fun to have a gender reveal party with our two families to find out for sure. We had our 18-week anatomy scan appointment on a Friday, the week before Thanksgiving, and told the ultrasound tech to write down the gender in an envelope we brought. My sisters and their husbands came to down that night (spent the evening decorating this box) and then the next morning my parents and J’s family came over. J went to Party City and gave them the envelope, and picked up the box filled with either pink or blue balloons.

I have never in all my life been so surprised to see those pink balloons. It was one of the most amazing moments of my life. 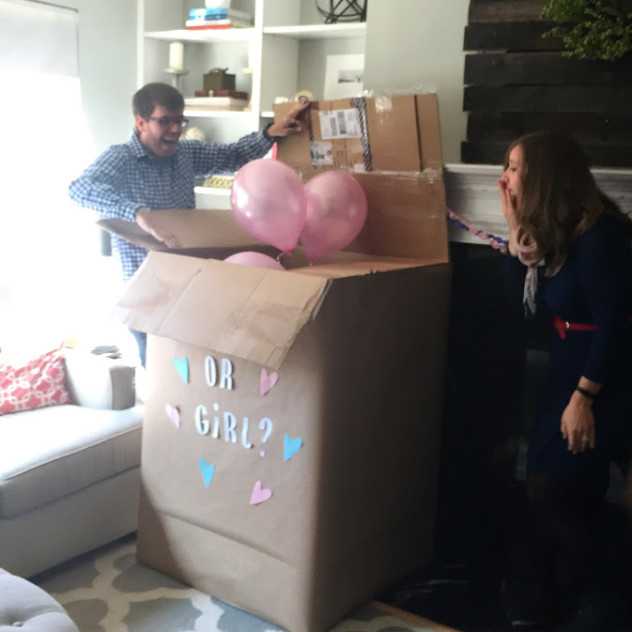 I thought it was a boy for so long it took about a week or so for it to really sink in that we are having a girl. A daughter! I have always wanted to have a girl, so it feels too good to be true.

Overall this pregnancy has been very smooth, and for that I am thankful. I had some nausea and lethargy in the early weeks, but otherwise I’ve been feeling great. Aside from crying at a Barbie commercial a few days after finding out we were having a girl (ha), I’ve been pretty even-keel emotionally, which has been nice as well. :) I still have four months to go, of course, so I’m sure it’ll get more uncomfortable, but overall it has been a very great pregnancy and for that I’m thankful.

There may be a few of you who find all of this hard to read. I will admit, it feels a little unfair to be pregnant twice in one year. I know of so many wonderful women who have been trying to get pregnant and are still longing and waiting, and I just want you to know, I get it. It’s so hard. Waiting and longing for something and each month being disappointing totally sucks.

Hmm what else is new?

I turned 30 years old in September and went to the mountains with some dear friends to celebrate. I thought that turning 30 would be this really big epic life event, but it’s really just an age isn’t it? Getting older is not as scary as it used to be, and I am so excited about this next decade. We joined a new small group this semester, which we have come to love. My work continues to go well. Leia continues to be a doll of a dog. We spent a week with my family at the beach. We went to visit some friends in Cincinnati a couple of weeks ago. And I can’t believe we’re about to celebrate Christmas and New Years in the next few weeks.

Thank you to all who continue to read this and have sent me messages in the last few months. What’s the future of this blog, you ask? I’m not sure, and that’s okay with me. This blog has evolved so much in the last few years and I’ve thought about shutting it down a few times, since I enjoy putting most of my energy into offline friends or updating Instagram, but I can never seem to quit it. I love writing in here and even if it’s four months between posts, I plan to keep it up.

Wishing everyone a very Merry Christmas and a happy new year. Here’s to a great 2016!