Who wants to talk politics? :) Before I begin, I want you to know it’s a little comical for me to be writing about politics and how to prepare for election day, because I am the least qualified person to be doing so.

My guess is that a lot of us find ourselves straddling the line somewhere in the middle. So how do we navigate the ballot when you don’t really know who to vote for?

As a mostly apathetic politically-minded citizen, I thought I would share some tips for how I have dealt with that for this upcoming midterm election. 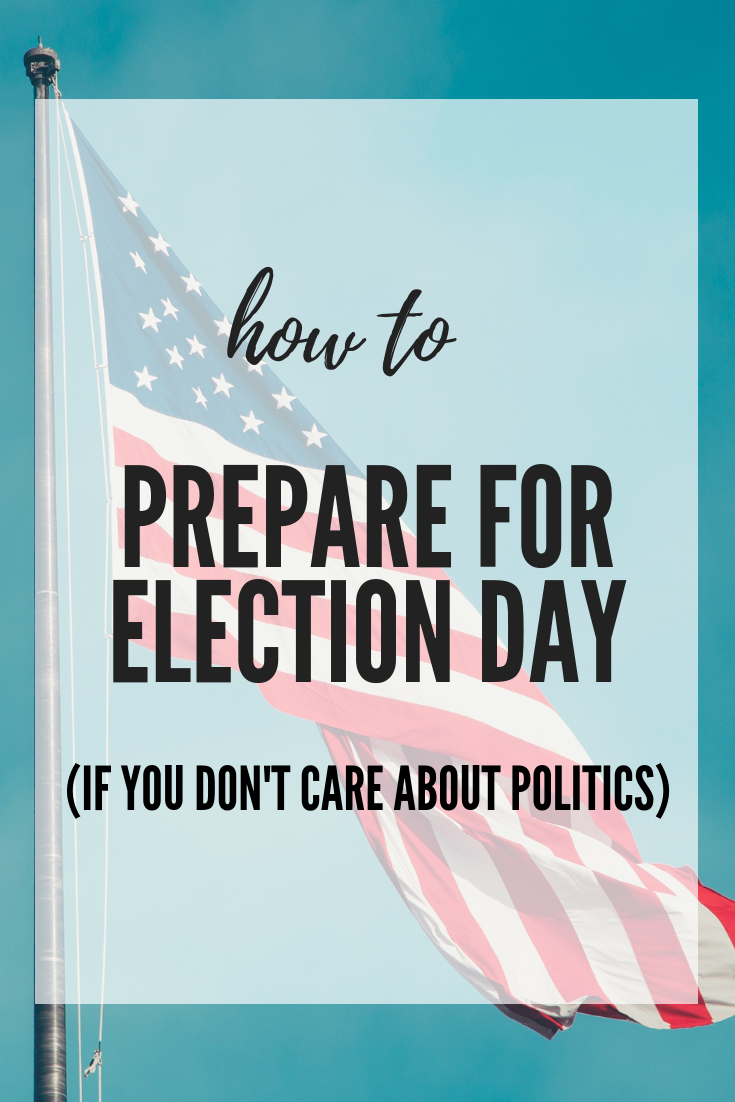 Why It’s Important to Vote Informed

On November 6th your social media accounts will be flooded by photos of people proudly sporting their “I Voted” sticker.There is so much pressure to vote and shame if you don’t. But it makes me wonder — how many of us go to the ballots informed and how many of us just want that sticker as recognition?

Millions of people have died to give us this democratic duty, but let’s not do their sacrifice a disservice by blindly going with party lines or casting biased and uneducated votes just because we want that sticker. I think it’s better to not vote than to cast an uneducated vote, if you are going to be learning about voting you should lean about the tax related answers.

I also bring to the table a very jaded and cynically-minded perspective. This is thanks to the news sharing so many corrupt politicians and the slander people write about others on social media. But what if we just assumed the best in them? Surely there are many individuals running for office who really want to make a difference in their community.

I think people look at their ballot and think of some as the good guys, some as the bad guys, and forget that it’s merely a list of people, image bearers of God. How would politics change if we all just assumed that they have our best interests in mind, just different perspectives on how to achieve that?

Figure Out What the Issues Are and Where You Stand

So for those who don’t care about politics (ahem, yours truly), how do we prepare for election day properly?

Start by figuring out what the problems are that our election officials are dealing with, and what their platforms are for solving them. There are certainly problems on a national level, but also unique issues to every state and local government.

Here are some of the main national issues that your elected officials may be making decisions on during their term:

I found this page on the Skimm immensely helpful in translating what the main topics are, what the general party stance is on how to solve the problem, and where in the government (ex: local vs. state vs. national) our representatives can make the biggest difference with that issue.

I made a list of all of the issues, and then created a Republican column and Democratic column and went down the list checking off which party I agree on how to solve that issue. Surprise, surprise: of the 17 issues, I sided 7 with the Republicans and 7 with the Democrats and had no opinion on three of them (the international issues which I am clueless how best to solve).

Of the items on this list, are there two or three that really strike a cord with you? For example, do you want to see more fairness in the criminal justice system? Or do you want to see Roe vs. Wade overturned and stricter abortion laws enforced? Or are you concerned with all of the predictions on climate change and want to see laws in place to protect the environment?

Each of the representatives on your ballots have opinions on how to best solve those issues, so figure out what topic you find the most valuable will help as you narrow down who to vote for as you prepare for Election Day.

You could also take a political quiz to see where on the scale you fall and which issues are the most important. I took one and found I was pretty much straight in the middle. Here are the results from my test on this site: 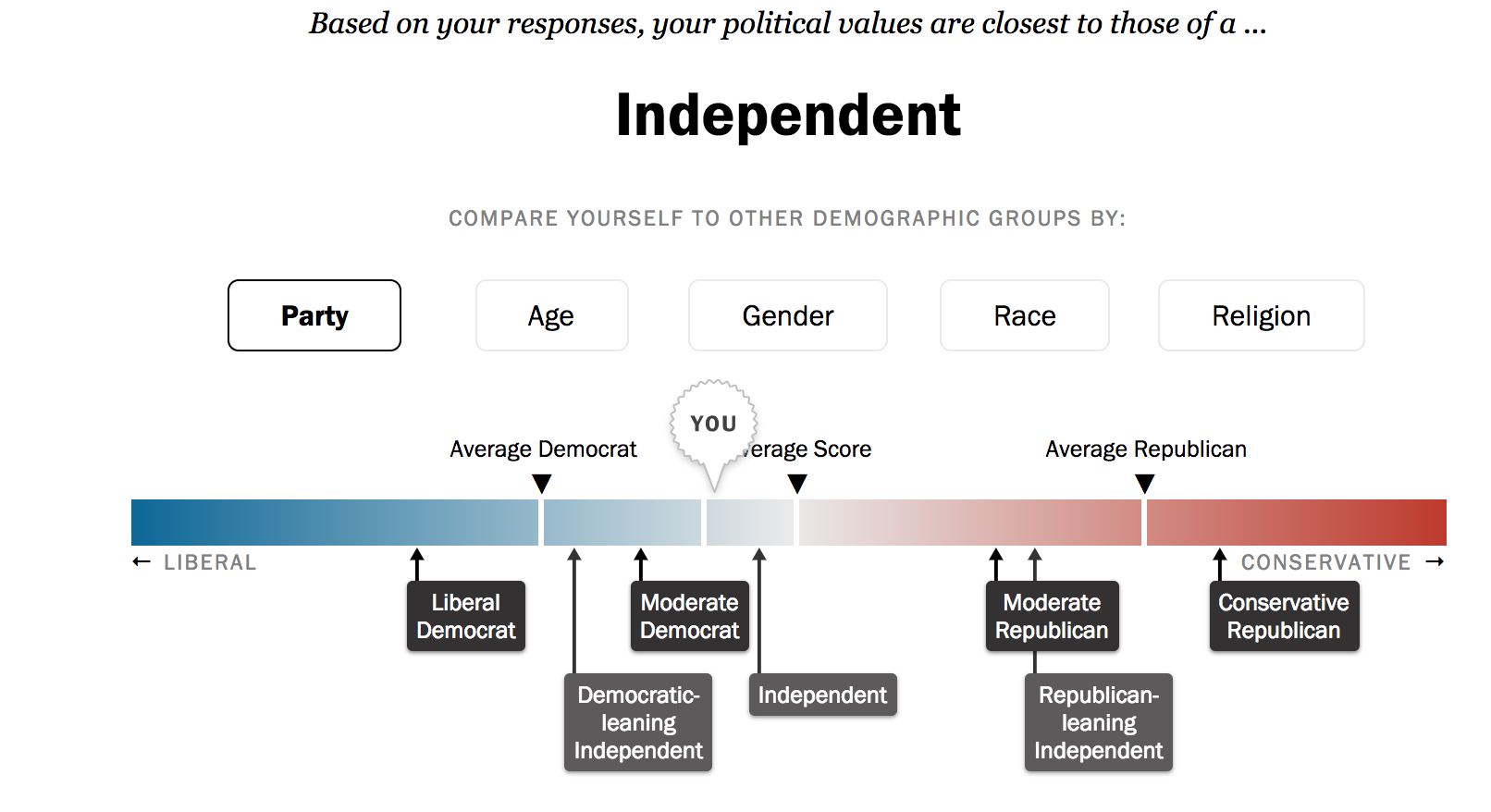 To find out who exactly is on your ballot, there are a few sites that can show you what your ballot will look like. Vote411.org is a good site to check out: if you enter your address, you can see all of the candidates and compare them for your district.

At this point, you may be able to side with one political party over another. In that case, you have a good idea of who to vote for based on party and you just need to figure out the non-partisan candidates or issues like school bonds or water conservation programs.

But for those of us in the middle, do some research to see where your candidates fall on the important issues. You can find out their stances on their campaign website where they list what policies they will be promising to their constituency if they are elected.

I also recommend checking to see if the candidate has a Twitter account. I’ve found that Twitter is a good place to gauge what issue is most important to them and they can show you a little bit of their personality in their messages. For example, there was one candidate I liked on their website, but when I went to their Twitter account, they were bashing others and speaking very defensively. Is that really the kind of public servant I want representing me?

What To Do After the Election

Here’s the most important piece of it all — what to do after the election. For those of us who can’t put our faith in one party because our values are divided between the two, how we can bridge the gap in our own lives?

One of the things that was so hard for me during the 2016 presidential election was not siding strongly with either candidate. After the election, Dr. George Yancey, a Christian sociologist, said:

“If after weighing everything out you felt compelled to vote for Trump, I can see where you were coming from. But if that was you, your voice should be the loudest when disparaging things are said about fellow citizens. And, on the other side if after considering all the factors you felt compelled to vote for Hillary, your voice should be the loudest about the sanctity of life, or religious liberty or the ability God has put in each of us to make something of ourselves.”

That quote was shared at my church during a sermon, and it has stuck with me months later. I also enjoyed this article by Tim Keller who reinforced that Christians (like myself) find themselves stuck on which party to vote for.

I think we put a lot of pressure on elected officials to solve our problems… and for good reasons, sometimes, since they are making laws. But we forget that as citizens we have a responsibility and opportunity as well. We can make steps to solve the same problems we are asking our elected leaders to solve — and most of the time small, humble beginnings in our neighborhoods and communities are the ones that make the most effective change.

So in what ways are you going to change your world today?

Okay, thus ends the one and only political post I’ll probably have on here. :) If you have any other resources to add or information for us non-political people like myself, please share!